Minnesota lawmakers are considering ways to protect voters from exposure to the coronavirus when they cast their ballots in this year’s primary and general election.

DFL Secretary of State Steve Simon is pushing for several temporary changes in state law, including one to allow more Minnesotans the option of voting by mail.

Simon made his case Wednesday during a remote meeting of the House subcommittee on elections. 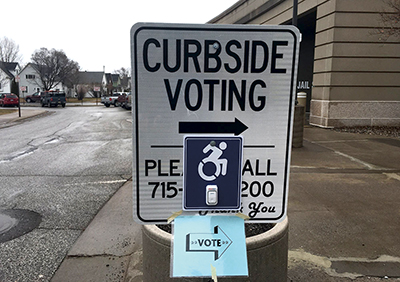 Government officials rigged up a curbside voting system outside the Government Center in Superior, Wis. Tuesday, March 7. Republicans on a Minnesota House elections committee made it clear Wednesday that they don’t support Secretary of State Steve Simon’s proposal to expand mail voting this year.Dan Kraker/MPR News

“We can’t just coast and glide on current law and think that’s going to do it,” Simon said. “We need some one-time emergency changes.”

Under Simon’s proposal, every registered voter in Minnesota would automatically receive a ballot in the mail, giving them an alternative to the long lines at polls seen this week in Wisconsin.

About 130,000 Minnesotans who live in small cities or rural townships already vote by mail.

Gelms also raised concerns about many of the order people who work as election judges being unwilling to serve because of health concerns.

Simon’s proposal is not yet in bill form. But Republican state lawmakers on the subcommittee still pushed back against the plan.

Rep. Jim Nash, R-Waconia, said he would prefer adding polling places. He opposes an expansion of voting by mail.

“It’s going to provide for a lot of electioneering, and it does open to door to election fraud,” Nash said.

“When we go and advertise and promote to everyone across the state of Minnesota that ballots for all voters will be in the mailbox, that’s when nefarious activity could begin to increase in the process, when everyone has that option,” O’Driscoll said.

Walz extends stay-home order to May 4

Minnesota Gov. Tim Walz is extending his stay-at-home order through May 4 and limiting bars and restaurants to takeout only... read more