The number of COVID-19-related deaths in Minnesota rose to 301 after 15 deaths were reported Tuesday morning, according to the Minnesota Department of Health.

The majority of deaths, 83 percent, have been patients aged 70 years or older. Thirteen percent have been aged 60-69 years, four percent 50-59 years, and less than one percent 40-49 years. 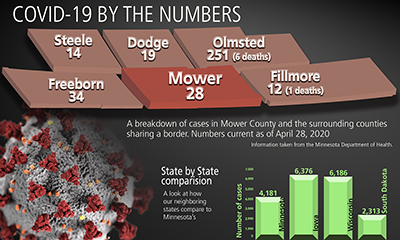 The state also exceeded 4,000 cases after an additional 365 confirmed cases were reported on Tuesday, bringing the total to 4,181. Of those, 1,912 no longer need isolation.

Tuesday’s total represents the largest single-day increase since the first case was detected in Minnesota on March 6.

Mower County remains at 28 confirmed cases as of Tuesday morning. At least 26 of those have recovered and no longer require isolation.