Hulne: Taking a moment to soak in the memories

While the sports world sits in a proverbial rain delay with no signs of letting up, it’s time to take a look back on the past.

I’m going to jump into my virtual time machine and name an outstanding male and female athlete, a play and a team from each school in our coverage area that sticks out from my 12 years as sports editor of the Austin Daily Herald.

Keep in mind, these are all plays, players and teams that I witnessed in person.

Male athlete Zach Wessels, 2014 grad: Wessels made his mark as a tremendous leader and floor general for the Packer basketball team and he also exploded onto the football field, becoming an all-state wide receiver for the Packers after taking a couple of years away from the sport. Wessels played at University of Sioux Falls.

Female athlete Sela Fadness, 2014 grad: You’d be hard pressed to find a better competitor than Fadness. The two all-around state gymnastics titles she won showed her ability to focus and compete, but I truly saw her toughness shine on the soccer field. Fadness was once blindsided by a ball on the field and was immediately begging to get back on the field while being given a quick concussion test. 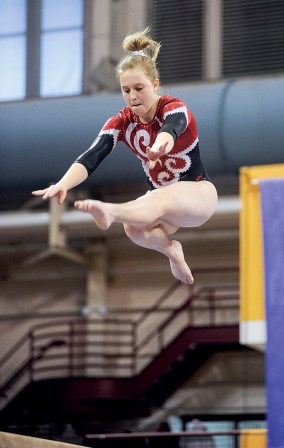 Austin’s Sela Fadness performs on the balance beam during the Minnesota State Class A Individual Meet at the University of Minnesota Sports Pavilion in Minneapolis. Herald File Photo

Play: I’ve seen thousands of big plays by the Packers, but the most impressive one was the execution by 2012 Packer boys basketball team, which earned the team’s first trip to state in 30 years. The win came on an alley-oop from Wessels to Tom Aase, who came off a back-screen from Goliath Oboyo, to beat the buzzer and beat New Prague 43-41 in the Section 1AAA Title game.

Team: While they weren’t the most successful team I’ve covered in Austin, I may always have a soft spot for the 2019 Austin boys soccer team. The Packers finished 14-3-2 overall, but their season ended in a 2-1 shootout loss to St. Cloud Tech.

The reason I’ll always remember this team is that I’ve never seen a team want it more. Junior Julio Hernandez was literally on his knees praying during the shootout and the Packers were crushed in a heap of emotion after the loss.

With players ranging from all over the world, the 2019 Packers clicked together throughout the year and their legacy will live on for generations to come.

Male athlete Jordan Hart, 2015 grad: Hart was effective in football and basketball, where he scored 1,000 career points, but he truly shined in baseball, where he was a power hitter who doubled as a steady pitcher. In college, Hart was named the Northern Sun Player of the year for the Minnesota State baseball team in 2019 and is the program’s all-time home run leader.

Play: While this column focuses on the past, I received a glimpse at the future when freshman Buay Koak exploded and dunked in a rebound put-back against Houston this season. It was one of the better plays I saw all year and it was probably the best play I’ve ever seen a freshman make.

Team: The Athletics girls basketball team went 32-1 overall and brought home the program’s first ever state title when they topped Sleepy Eye 57-33 in the title game. LP won the state title by playing through their 6-5 post player Kristi Fett, who had 26 points and 14 rebounds in the state title game. Fett now plays at Minnesota State University. 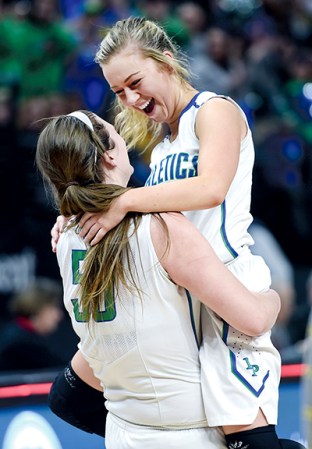 The summer after she led BP to state, Swenson made a trip with her mother to Haiti to teach women to make bead designs so they could earn a living. 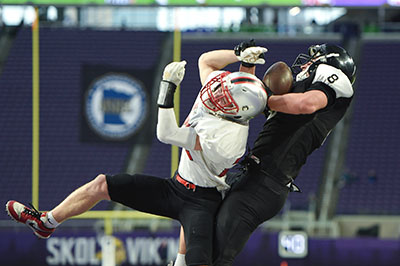 Blooming Prairie’s Gabe Hagen pulls down a contested catch in the Class A Prep Bowl at US Bank Stadium. Herald File Photo

Team: The 2019 Blooming Prairie football team went 14-0 overall and it didn’t have a weakness as it rolled to a state title. Their line was tough as nails, their skill guys were fast and effective and quarterback Kaden Thomas rarely made a poor decision.

Male athlete Mike Goergen, 2013 grad: While his football career was cut short by injuries, Goergen was an explosive runner who could put fear into any defense. He had committed to North Dakota State University, but he eventually decided to leave the team and go into the workforce. Goergen was also a big presence on the basketball court as he is Southland’s all-time leading scorer with 1,785 career points. 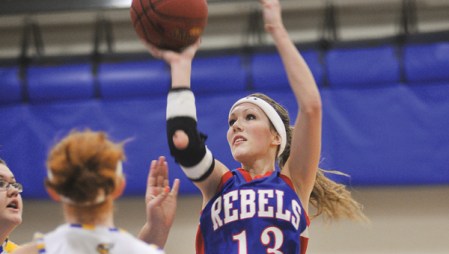 Play: Brian Voigt gave the 2008 Southland baseball team a commanding start when he blasted a two-run homer off the scoreboard of the Mini Met in the first inning of a first round game against Red Lake County.

Team: The 2008 Rebels finished 26-4 overall, but they missed out on a state title as they lost to Wabasso in the state title game. Southland hit .318 as a team that season and it was led by Brian Voigt and Kody Retterath.

Male athlete Mason Tapp, 2018 grad: The athletic Tapp was a force to be reckoned with for the Hayfield basketball team last year and is now playing at the University of Saint Thomas. Almost just as impressive, was the range he showed for the Section 1A championship Hayfield baseball team last spring.

Female athlete Dani Wagner, 2015 grad: The former Gopher softball standout may be the best all-around athlete I’ve covered in my 15 years in journalism. Wagner’s senior year at Hayfield saw her hit .700 with 13 home runs in softball, average 18.3 points, eight rebounds, 4.4 assists and 4.3 steals per game in basketball and rack up 298 kills in volleyball.

Play: Hayfield freshman Cole Kruger made the biggest shot of his life when he banked in a contested buzzer-beating three to give Hayfield a 44-42 win in the Section 2AA South semifinals in 2011. The Vikings had missed four go-ahead field goals and four game-tying free throws in the two minutes leading up to Kruger’s miracle heave.

Team: The 2018 Hayfield softball team not only clinched the fourth straight trip to state for the Vikings, who finished 14-9 overall, they nearly pulled off a giant upset as they gave up a late lead in a 6-5 loss to eventual state champ New York Mills in the state quarterfinals. Carrie Rutledge proved to be a versatile threat in the field and at the plate for that Hayfield team.

Male athlete Landon Jacobson, 2015 grad: Jacobson was a warrior in the weight room and the football field. He finished with 9,053 career all-purpose yards and 96 TDs, while also doubling as a menacing linebacker for the Superlarks. Jacobson played football at Winona State, but he has been riddled with injuries. 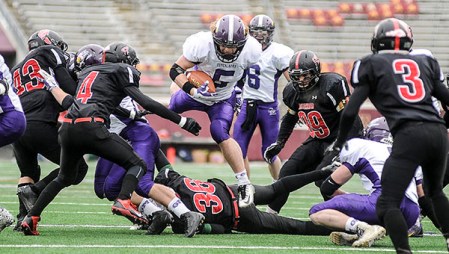 Female athlete Jessica Benson, 2009 grad: Benson, who went on to play at St. Cloud State University, was simply one of the best girls basketball players to come through this area in the past decade. Benson eclipsed the 2,000 point barrier in her career and her senior year saw her put up dominant numbers – 24.6 points, 11.7 rebounds, 3.6 assists and 4.3 steals per game while shooting 49 percent from the field and 80 percent on free throws.

Play: Michael Stejskal, who had played wide receiver in his first two years with GM, showed that he could play a little quarterback as well as he fired a rocket to the back of the end zone to Terrell Rieken for a 14-yard TD that put the 2015 Superlarks up 28-20 with 3:52 left in the game in the Prep Bowl against Underwood. GM would win 34-20 to lock up its third straight state title.

Male athlete Trey Hungerholt, 2018 grad: The versatile athlete always went full speed, whether he was playing football or basketball. Hungerholt finished his career 1,772 points in basketball, the most in LO history. 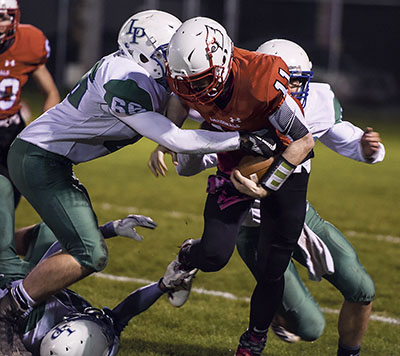 Female athlete Kaylee Bunne, 2009 grad: While rather small in stature, Bunne lived up to her last name as she could jump well over the net in her role as an explosive attacker for the Cardinal volleyball team. Bunne went on to play volleyball at the University of Saint Mary’s in Winona.

Play: The Cardinal volleyball team hasn’t had a lot to celebrate about in recent years, but that all changed in an upset over Blooming Prairie in the fall of 2019. When freshman Jordan Runde put down a back-line kill to put the Cards up 13-9 in game five the Cardinals were in control of the upset win.

Team: The 2009 LeRoy Ostrander volleyball team bewildered opponents with a quick-set offense that was unpredictable and devastating. Led by Kaylee, and her cousin Mac Bunne, the Cardinals rattled off a record of 26-5 overall.

Greg Calvin believed his job as an audio technician could survive most economic downturns because people will keep watching sports... read more