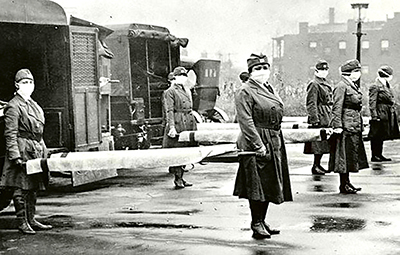 “(He) was in the best of health when he left for the service with a splendid constitution. Only the danger of the battle line was feared for him, yet he fell victim to an epidemic.”

Austin newspapers were peppered with items about those falling ill with the Spanish flu in the fall of 1918, starting with hardly a mention in mid-September to an explosion of obituaries a month later.

Today, the news is still filled with the effects of a worldwide pandemic – only this time, it is called the coronavirus.

News outlets today have been much interested in the Spanish flu of 100 years ago; like the scourge of today, it spread quickly and cruelly.

However, the impact of today’s virus will almost certainly be different. Medical knowledge about viruses is far greater today than in 1918, when there wasn’t even a microscope that could identify them. Hospital care and sanitation were primitive in comparison – and a world war seemed to have been a key to its spread. The most cruelly affected were the boys who left town to fight in World War I. The combination of close camp and troop ship quarters, and the age of the men, launched a march of death through the ranks.

J. H. and Gertrude Skinner, publishers of the Austin Daily Herald and editors of the “Mower County in World War I,” reported that over 100 people from Mower County died and over 7,000 were infected.

Everything about the deathly 1918 pandemic was at odds with what most thought they knew about influenza. While the elderly and the youngest were most vulnerable in earlier outbreaks, this one seemed to target the most robust and healthy, with those between the ages of 20-40 years of age affected. The 1918 flu struck swiftly in its second, more deadly wave that fall: a person could fall ill in the morning and die in the afternoon.

Within hours of feeling the first symptoms of, fever, and headache, victims’ faces would take on a bluish cast; they could cough so hard they could tear muscles.

Still, response to the pandemic was eerily similar then as today. As gathering places closed throughout the nation last month, the doors of schools, churches, theatres and other events closed just as firmly in 1918. Even funerals were private by edict. Although they were not sure why, officials knew in 1918 that less contact with your neighbor meant fewer chances of catching the dreaded illness.

Unfortunately, war recruits did not have the luxury of isolation. For the vast majority of those from Mower County who died in the service, death came from influenza. The training camps – Forrest, Grant, Oglethorpe and Cody were the most often mentioned in the local papers– were rife with the virus. At Camp Grant, near Rockford, Illinois, where several from Mower County trained, there were eight cases of the flu reported on Oct. 1, 1918; on Oct. 2, the number rose to 50 cases; on Oct. 3, there were 800, according to camp records. So bad was the death rate at Camp Grant its commander killed himself, feeling personally responsible for not being able to stop the illness that was killing his men.

Four Mower County soldiers died at Camp Grant. One was Harry John Mechenich, 22, who died Oct. 10. The Rose Creek boy, the papers reported, “was in the best of health when he left for the service with a splendid constitution. Only the danger of the battle line was feared for him, yet he fell victim to an epidemic.”

All the stories were heartbreaking, some particularly so. Arthur Christensen, 24, of Austin, died at Camp Hancock near Macon, Georgia, on Oct. 3; his brother-in-law, George Hansen, 25, also from Austin, died the next day in the same camp.

“The bodies were brought to Austin for burial and as was fitting, honors were paid to the two boys jointly,” reported the Herald editors. “With October’s blue vault above, in the fullness of the year, with the fallen leaves of unnumbered trees sounding the dirge of another season, as they rustled under foot, they gathered at the home of Martin Hanson, drawn together by old acquaintanceship, united by marriage, and by common sorrow.”

Two Grand Meadow brothers in service, Arthur H. Dietrich, 24, and Henry Adolph Dietrich, 29, both died from influenza – Arthur while in England, and Henry at Camp Dodge.

“Quite a number from the Valley attended a big Liberty Day celebration at Austin,” said one reporter, writing about the Root River Valley in the fall of 1918. “The rest of us were threshing or had the flu.”

Today, there are still questions as to what caused the deathly illness. Some have hypothesized that a mutated strain was created from an avian strain and human virus.