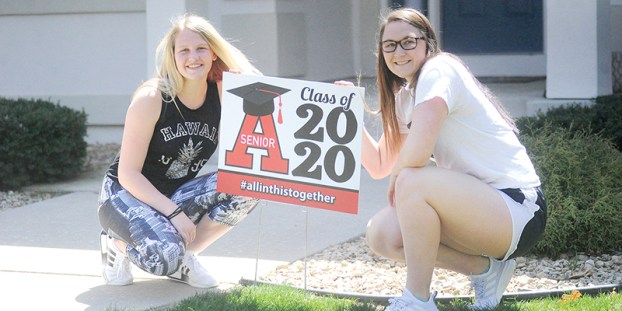 Austins senior Kyra, Walters, right, has served as a postiive role model for her younger sister Mya. Despite having type one diabetes and still been able to thrive as an athlete for the Packers. Rocky Hulne/sports@austindailyherald.com

Austin senior Kyra Walters found out she was a type 1 diabetic when she was seven years old, but she never let it slow her down.

Kyra has been on the move since she was a third-grader and she’s dabbled in as many sports as she could find time to play. Kyra has competed in basketball, softball, track and field, tennis and volleyball in her four years with the Packers. She also played goalie on a summer soccer team before her junior season.

Kyra, who is also in the National Honor Society, was always aware of being diabetic, but she never considered slowing down.

“At first, I thought that I may not be as capable of other athletes, but I’ve realized throughout the years that it was a mind game,” Kyra said. “I have to keep checking (my blood sugar levels), but it doesn’t hold me back from anything I want to do.”

Kyra’s hustle has spread to her teammates over the years and it has also inspired her younger sister, Mya, who is a freshman. Mya is the youngest of the four Walters children and she’s always looked up to Kyra.

Mya competes in soccer, basketball and track and field.

“Kyra’s been such a good inspiration. She’s positive, she pushes me to be better and she helps me out with sports,” Mya said. “I want to get as good as her, or maybe even better, but she’s really good so it’s going to be hard. I’m going to push myself and I know when she comes back from college, she’s going to push me too. We’ll always work together.” 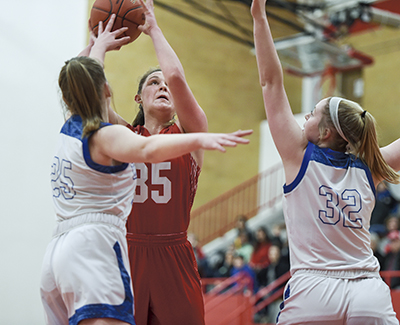 Kyra Walters shoots under pressure against Kasson-Mantorville during the first half of their Section 1AAA semifinal matchup this past basketball season. Herald file photo

Kyra will attend Winona State University next year, but she will not be playing for the Warriors. Instead, she will try to get on an intramural slow-pitch softball team with her brother, Ryan, and she will also play intramural basketball.

In a time where COVID-19 has shaken the medical field, Kyra is still set on pursuing a nursing degree. It’s a natural fit for her, as she’s been in a hospital once every three months since she was seven years.

“The pandemic has really shown how important nurses are. I’ve always wanted to help people out,” Krya said. “Nurses really change your life. When you go in there they make a positive impact whether you want to come back or whether you don’t want to come back. I just want to be that nurse in someone’s life that makes people want to come to the hospital because their experience was so good.”

Whatever Kyra does, she’ll always have Mya looking on and following her lead. Mya watched with delight when Kyra played with the Packers in the Minnesota Class AAA State Basketball Tournament in 2019 and she embraced the opportunity to share the court with Kyra on a few occasions this past season.

“It made me really happy when I played with her. It was fun and funny whenever she yelled at me to do something,” Mya said. “I know I need to push myself every day to work to where I want to be. I just have to work hard to get where I want to be in school and sports.”

Losing the last three months of her senior year has been tough for Kyra, but she’s been able to find ways to stay entertained in the house with Mya.

“As an athlete, it’s weird not playing a final sport in your final season,” Kyra said. “It’s hit me a little bit harder that I need to make up my own things to do. I need to be more athletic in things I do around the house or go out for runs. It’s weird, because I’ve been going since I was in third grade.”

As for the potential of Mya with the Packers, Kyra is expecting some big things from her little sister.

“I think she has the drive,” Krya said. “She wants to not only impress others, but impress herself. She pushes herself to a higher standard every day. I think she’ll be really successful.”

Pence to visit Mayo Clinic to learn about testing ‘moonshot’