Both Gach declares for NBA draft

Austin native Both Gach is testing the market. 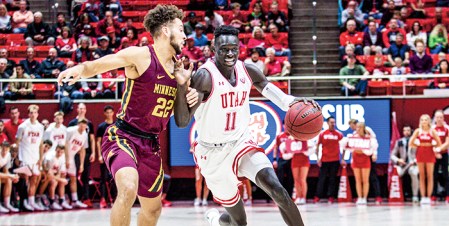 Austin native and Utah sophomore Both Gach drives past DeLaSalle grad and Gopher sophomore Gabe Kalscheur in a past game for the Utes. Photo by Utah Athletics
Utah Utes take on Minnesota at the Jon M. Huntsman Center in Salt Lake City UT. on November 15, 2019.

Gach, a sophomore guard at Utah, told 247Sports.com that he is declaring for the NBA draft on Monday, but he will not hire an agent, meaning that he will be eligible to return to the Utes next season.

Gach averaged 10.7 points and 3.6 rebounds while shooting 40 percent from the field, 25 percent on three-pointers and 78 percent on free throws this past season for the Utes (16-15 overall).

The NBA season is currently on hold due to the COVID-19 outbreak and it is uncertain if the season will resume. The NBA draft is set for June 25.

Ever since his days as  a goalie for the Packers, Austin grad Rainer Londino-Green has always loved to sit down... read more