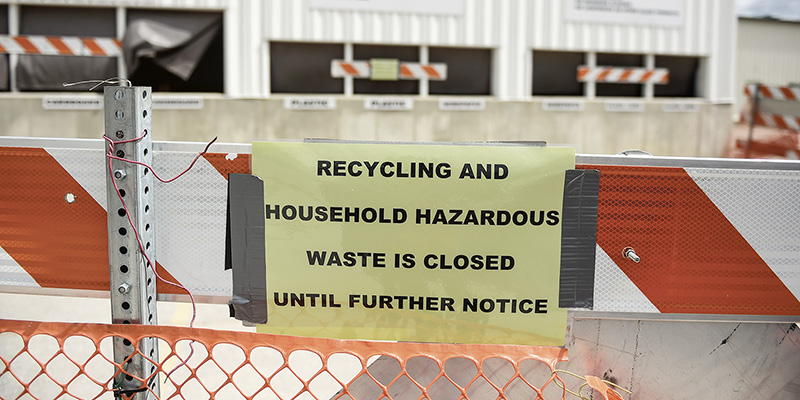 Signs mark the Recycling Center as off limits to collection. The county closed the center until May 4. Herald file photo

This reopening includes both drop-off and curbside services.

The county declared a state of emergency on March 18, shuttering the recycling center and hazardous waste facility. Then on April 7, it further suspended services through May 4.

The move was made out of concern for the county’s partners at Cedar Valley Services, which staffs the recycling program with up to 12 employees.

“May 4 would be the date. This would be what Trish (Harren, Mower County Administrator) would call hard open,” said Mower County Public Works Director Mike Hanson. “In other words go back to business as usual. Open drop-off and curb side on May 4 and get outlying drop off facilities open as well.”

However, the reuse room, where salvaged material is displayed and can be picked up by the public, will not be open until further notice.

Staff will be wearing personal protective equipment and will use disinfectant on surfaces, pens and door handles along with whatever else needs it.

The county is asking the public to:

• Use the curbside service if it is provided instead of bringing it to the drop-off sites.

• Back vehicles into the marked (striped) stalls at the drop-off facility and maintain social distancing as much as possible.

The county is also asking citizens to not drop everything off at one time, instead taking a staggered approach. This is in step with a concern of a wave of material coming into the center at the beginning.

“We may have to extend shifts,” Hanson told commissioners. “We’re asking the public to help by not putting all things in the first day or week.”

That concern was echoed by CVS Executive Director Richard Pavek during the meeting, though he also showed confidence that his people will get the job done.

“My only concern is opening at one time, but I understand the rationale behind doing it,” Pavek said. “My concern is being swamped. It will be busier in the beginning for sure.”

That sentiment was something Board Chair Jeff Baldus said he understood, but added that it was something all parties were going to have to cope with in the face of getting the program up and running again.

“You and your people, and I realize we’re asking people not to bring everything in at once, but let’s please also know that your people will probably be in much greater demand,” Baldus said. “Lets just be prepared to be extremely busy, tolerate it and make it happen for a couple weeks.”

The board also approved a resolution to lend more support to feedlot operators in the county.

It will allow feedlot operators to temporarily expand their operation, extending their animal numbers without the need to repermit. The move follows a similar plan by the Minnesota Pollution Control Agency.

Feedlot operators will still have to go through the proper permit channels, but the overall effort is simply to continue supporting them during these difficult times created by COVID-19.

Nationwide interruptions from COVID-19 are putting strains on the industry at all levels, though officials earlier this week said Minnesota’s supply remains stable.

Meat packing plants across the nation are experiencing their own difficulties as COVID-19 has impacted them in ways, such as forcing them to scale back operation or close completely. One notable example is Smithfield Foods that halted production in Sioux Falls, South Dakota and JBS pork plant in Worthington — both shut down operations because of outbreaks of COVID-19 among plant employees.

This is trickling down to producers. As plants close or pull back production, it’s limiting places for producers to bring their animals, forcing them to euthanize animals in some circumstances.

Even though it hasn’t happened in Mower County, officials recognize the need to be prepared.

“We’re working with the (Emergency Operations Center) … we’re going to be hauling wood chips and sawdust and drop our first 10 loads in Dexter in case we have euthanasia going on,” Hanson said. “It’s happening over by Mankato. If the hogs are euthanized we have to help deal with them. We’re getting that material, wood and sawdust, so they can compost.”