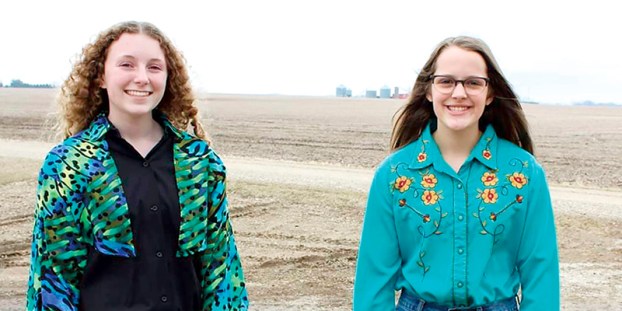 4-Hers finding success on the road to being problem solvers

Austin High School students Brianna Klouse and Maddison Hoesing are getting a firsthand experience in problem solving in agriculture.

The duo, who are cousins, recently put together a model on how E. coli can be harmful to water for a 4-H Science of Agriculture Challenge. Klouse and Hoesing also completed a project on how E. coli affects food a year ago.

The two are set to compete in a virtual Regional Tournament on June 8 through a zoom presentation.

“We realized that there are so many different parts of E. Coli. The first year we focused on the food part of it, and now we’re focused on the water part of E. Coli,” Klouse, a tenth grader, said. “E Coli isn’t always bad for you. You can swim in water that has it, but you shouldn’t drink it and you shouldn’t get an open sore or wound.”

Klouse and Hoesing’s model shows how to properly spread manure in a field while keeping it out of range of water. They noted that manure should be spread 50 feet from any water sources and it shouldn’t be placed during rain.

When they looked at multiple fields near their home, Klouse and Hoesing found real-life examples of manure not being placed properly. The cousins also found that Mower County has a relatively high level of E coli in its water, compared to a few other counties they researched in Minnesota.

“This is happening a lot in Mower County and we want to be able to prevent that,” Hoesing, a ninth grader, said. “We want to keep it out of our water system.”

The model is set to be used at the Cedar River County Watershed booth at the County Fair and Klouse and Hoesing have also created a youtube video for their project that has been used in classrooms.

“We want to educate others with an argument from evidence,” Hoesing said. “We want to spread it out to the community.”

The project was completed through Mower County 4-H and the University of Minnesota Extension.

As part of the Science of Agriculture Challenge, Klouse and Hoesing asked questions and defined problems, they developed and used a model, they planned and carried out investigations, they analyzed and interpreted data, they used mathematics and computational thinking, they constructed explanations for science and designed solutions, they engaged in argument from evidence and they obtained, evaluated and communicated information.

Masks to the People

When the COVID-19 pandemic shut down Rose’s Nails, owner Rose Le changed her daily routine. Instead of working on nails,... read more