Thompson is hoping for one more spring with the Packers

Austin senior Avery Thompson doesn’t remember exactly when softball became her passion, but she knows that she is counting down the days until she gets back on the diamond.

Thompson would like to be on the field with the Packers this spring, but the earliest that could happen would be May 4, and that will only happen if the COVID-19 virus has been contained enough to allow a season. If Thompson doesn’t get to play for the Packers again, her next official softball game will likely take place at the college level as she has committed to play for Division III St. Scholastica in Duluth.

Thompson said the Packers are hoping to have a good spring if they do get on the field this year. 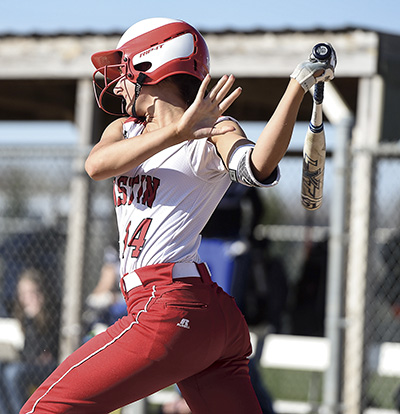 “It’s really sad,” Thompson said. “We have a good group of seniors who have been playing together for all four years of high school and we have some really good talent coming in. It’s sad if we don’t get to play this year.”

Thompson began playing softball when her dad would play catch with her and have her hit off a tee before she was even in kindergarten. Since she’s been in high school, she has spent a lot of her down time driving to Lakeville to play in a travel team that travels all over the U.S. in the summer. The team practices in the winter and the fall and Thompson has made a point to get in as much time as she possibly can.

“Since I started playing with my dad, I just haven’t wanted to stop. I’m glad to be playing in college. I’m just not ready to be done,” Thompson said. “I’ve put in a lot of time and work to be able to play college softball. It’s a lot to look forward to. It makes all of the time and gas money worth it.”

Thompson was looking for schools with a physical therapy program where she could play softball and St. Scholastica won her over pretty quickly.

“I just really love Duluth,” she said. “I really love their coach and their team chemistry.”

Thompson is likely to remain as outfielder at St. Scholastica.

St. Scholastica’s softball team finished with a record of 7-7 overall in its virus-shortened season. The Saints went 23-16 overall in 2019.

WNBA draft will be virtual event this season

NEW YORK (AP) — The WNBA draft will be a virtual event this year. The league announced Thursday that its... read more