By Tim Nelson and Elizabeth Shockman

Thousands of union teachers and other professional school staff headed for picket lines Tuesday morning instead of classrooms. The St. Paul Federation of Educators and their 3,600 members went on strike after late-night talks with the city school district failed to produce a contract agreement.

District and union leaders struggled to reach a deal after negotiations intensified the past few weeks. On Monday, the district offered arbitration, but the union declined. Talks collapsed around 3 a.m. Tuesday. 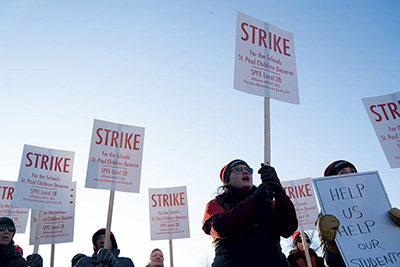 Teacher Amelia Feest and other St. Paul Federation of Educators members strike on the corner of Dale and Maryland in St. Paul, Minn., on Tuesday. Evan Frost/MPR News

Union representatives said the district had not come close enough to satisfying their demands for more funding of mental health services for students, as well as more multilingual interpreters and special education funding.

Briefing reporters late Tuesday morning, Joe Gothard, the district superintendent, acknowledged that no new negotiations are scheduled currently and that students would not be in school “today and in the indefinite future, as it stands right now.”

Gothard said talks broke down with about a dozen union issues unresolved. He didn’t name the proposals but made it clear cost was the central problem. “If I could do everything on that table … we wouldn’t be having this press conference, or it would be having a much different tone,” he said.

While the union said its plan would have stretched out increased hiring over three years to give the district budget flexibility, Gothard has said the district does not have room in the budget to fill all the demands teachers given lower state and federal funding and the loss of 2,000 students over the last four years.

With no agreement, union leaders signaled to members in the wee hours of Tuesday morning that the strike was on and school was off for the district’s roughly 37,000 students. Parents were formally notified of a walkout around 5 a.m.

“Educators want to be with their students. But they also want their students to enter schools that are supported and have the resources our kids need to thrive,” he said. “St. Paul is filled with beautiful, brilliant students. And sometimes, just like all of us as adults, they need help. And right now our schools are lacking those supports.”

“What we have, we’re just not getting through to every single student who needs our help,” said Thao.

In a statement released Monday night, St. Paul Mayor Melvin Carter said some school buildings, recreation centers and libraries will remain open to serve youth ages 18 and younger free breakfast, lunch and snack. Recreation centers will open an hour earlier, at 1 p.m. The measures are expected to help a fraction of the student body.

Negotiations over a new contract began in May. Two years ago, the district narrowly averted a strike, which would have been the district’s first since 1946.

ST. PAUL — A Minnesota mother has admitted she severely injured her 11-year-old son by throwing him from the balcony... read more