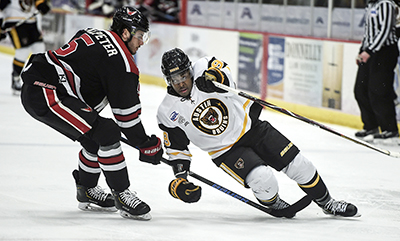 Austin’s Dante Sheriff goes down trying to get around Aberdeen’s Max Salpeter in the Central Division semifinals at Riverside Arena this past April. Herald file photo

Sliding into the offseason: Austin’s all-time leading scorer has his NAHL career come to an end

Dante Sheriff didn’t know he had scored his final goal for the Austin Bruins when he and his teammates left town last week, but he now knows he’ll never play hockey in Austin again.

The NAHL called off its season due to the COVID-19 outbreak yesterday and it officially ended Sheriff’s NAHL career. Sheriff, a native of Woodbridge, Ontario, had been one of Austin’s top players in each of his three seasons with the team and he finishes as Austin’s all-time leading scorer with 158 career points in 141 games. He tallied 52 goals and 106 assists.

Sheriff is still spending a lot of time on the ice, but it’s in an effort to play Division I hockey at Mercyhurst, not to help the Bruins, who would’ve had nine games remaining before the start of the postseason, when players were sent home.

“It was hard to leave. You didn’t really know that was your last game and it being my last ever junior game made it sad. It’s better to be safe than sorry (with the virus) though,” Sheriff said. “We didn’t really get to say goodbye to each other. We thought we were coming back (to Austin) when we left.”

Austin head coach Steve Howard has now found himself planning out the team’s three tryout camps in May, which take place in Detroit, Las Vegas and Minneapolis. He said it feels like going golfing during hockey season and he’s not sure how to handle the quick turnaround from regular season to offseason.

“The closest thing I can think of (to this) would be a team folding in the middle of the year and guys would have to scramble to find jobs,” Howard said. “It’s an empty feeling. Normally I get closure and talk to the guys about next year or their future. It just kind of happened and we sent them on their way saying ‘they’ll hear from us.’ I feel like I’m holding something and I don’t know what it is.”

There was a small window for the NAHL to schedule it’s playoffs, but it would have very likely happened in an unorthodox way and teams would’ve had to play their way back into form after the break. Instead of preparing for postseason hockey, the Bruins are preparing for the 2020-2021 season.

“We’re trying to make sure we come back next year bigger and stronger,” Howard said. “We’re worried about the safety of our players and fans. We’re learning more and more each day. You start to realize it’s bigger than hockey and a lot of our sponsors are trying to stay afloat.”

“It’s been fun in Austin. I didn’t really focus on the scoring part; I just wanted to help the team the way that I could,” Sheriff said. “I guess I kind of got lucky to be the leading scorer for the best organization I ever played for. I’m just honored. I want to thank my teammates, family, fans and the coaches.”

Howard thanked the billet families for hosting players, the fans and the sponsors.

“We appreciate the city of Austin and the fans,” Howard said.