Bob was born to Duane Highet and Ione (Helland) Speer on Oct. 19, 1965, in Austin, Minnesota. He graduated from John Marshall High School in 1984. Overcoming the loss of his father, Bob took on the responsibility of being the head of household. While ensuring the health and welfare of his family remained intact, he attended Rochester Area Vocational and Technical Institute and obtained a diploma in machine tool trades in May 1986. 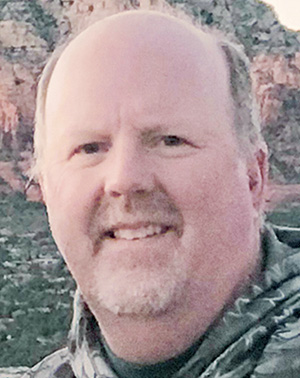 Bob reconnected with Mindy McCoy, a lifetime friend, in March of 2013. He immediately realized he had met his true love, best friend, and life partner. Bob and Mindy were married on July 16, 2016. They celebrated at his childhood home in the presence of family and friends. On that day, with open arms he happily and whole-heartedly gained three children – Kayla  Brandon, and Taylor Arneson.

Bob made it a point to spend quality time with his family because they all meant the world to him. Filling his heart further, he was blessed with four grandsons: Wesley Kennedy and Finley Robert, sons of Robbie Highet (Paige Powrie), Patrick Edward Carr III, son of Pat and Jeanie (Highet) Carr, and Kysen Michael Arneson, son of Kayla Arneson. He enjoyed reading books to his grandsons. He loved watching them grow into the little men they are. Each hold a special place in “Papa’s” heart.

Bob was a successful man in his career at Mayo Clinic, contributing 32 years and 8 months to the company. He was everyone’s go-to-guy. Bob was the person who could make all dreams become a reality. Bob had great attention to detail and never allowed his work to be anything but exemplary; he never left a project undone. He enjoyed mentoring the next generation.

A special message to his work family: “I love them and they are and always will be my family. They are the best of the best.”

Bob was an avid hunter, fisherman, family man, handyman and, above all, a friend to everyone he came in contact with. He had a special place in his heart for archery, spending any free time he had at the Rochester Archery Club, where he was also a board member for many years.

Bob will never be forgotten and will be deeply and forever missed. Bob was taken too soon, but we will forever hold the beautiful memories in our hearts forever.

A celebration of life will be held at 3 p.m. on Thursday, March 5, 2020, at Bob and Mindy’s favorite place, Beetles Bar and Grill, 230 20th Ave. SW. Rochester. MN 55902. A private family service has been held. Ranfranz and Vine Funeral Home is honored to be serving the Highet family; to share a special memory or condolence, please visit www.ranfranzandvinefh.com.