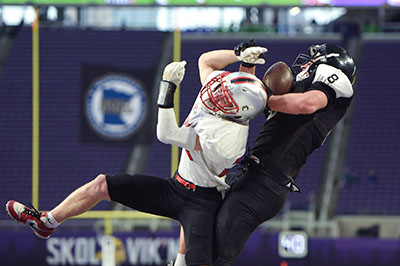 Blooming Prairie’s Gabe Hagen pulls down a contested catch in the Class A Prep Bowl this season at US Bank Stadium. Herald File Photo

One of a Kind: BP’S Hagen grew up on sports, than delivered on the biggest of stages

BLOOMING PRAIRIE — Whenever he went to a family get together, Blooming Prairie senior Gabe Hagen could be found among his 25 cousins, most of them older, playing football, basketball, tag, climbing trees and sledding.

BP’s big man, who has committed to play Division II football at Minnesota State University, was much smaller back then, but he wasn’t slowing down. Austin grad Danielle Tschann, who played four years of softball at the University of Saint Thomas in the Twin Cities, was one of those cousins running around with Gabe.

“I think this is what made him such a silent threat,” Tschann said. “He had to endure a lot and honestly, I think it’s what helped him maintain his composure throughout his athletic career.”

Blooming Prairie’s Gabe Hagen works inside against Southland in the first half in the Section 1A quarterfinals. Herald File Photo

Tschann also recalls that Gabe had quite the appetite as she once took him to Tendermaid when he was eight years old. Gabe put down three cheeseburgers, a bag of chips, a bowl of chili, a milkshake and part of Tschann’s milkshake.

“I asked him if he was still hungry after his first cheeseburger and that was probably a poor choice on my part,” she said.

Gabe put up a high school athletic career for the ages as he led BP to its first ever state football title, he led the BP boys basketball team to its first state berth since 1966 and he will be a contender to get to state in shot put if there is a spring sports season this year.

Gabe grew up around sports as his older sisters Morgan and Taylor were playing for the Awesome Blossoms when he was just a youngster.

“I was kind of born into sports,” Gabe said. “I just followed along with Taylor and Morgan. I was always at basketball tournaments for AAU and I was always watching football on TV.”

All of that time on the sideline wasn’t wasted. Gabe certainly had lot of inspiration from watching Taylor, a 2015 BP grad. Taylor finished her BP career with 1,551 career points, 914 career rebounds and 293 career blocks. She also surpassed 1,000 kills in volleyball and she took fourth place in shot put at the state meet as a senior.

Gabe used to put in basketball workouts with Taylor, who scored 534 points and grabbed 337 rebounds in four seasons at Division I University of Northern Iowa. She’s helped Gabe prepared to compete in college by comparing it to a full-time job.

“I think he always wanted to be better than me,” Taylor said. “He makes me really proud with the way he carries himself outside of the court, as well as on the court. One thing I really love about him is he always pushes the people around him to be better. He’s always been caring and he always wants to include everybody.

Gabe and the Awesome Blossoms will never know if they would’ve won a state basketball title this season, but they do know that their football title will stand in the hall of Blooming Prairie High School for generations to come. Gabe said it’s hard to believe his days as an Awesome Blossom are coming to an end.

“It’s kind of sad. It went by so fast,” Gabe said. “I remember coming up as a freshman and everyone was telling me I was lucky and I should enjoy it because it goes fast. That was true. It flies like no other. My love of the game kept me going. I always wanted to get better, I wanted to compete and I wanted to make my teammates better so we can win state championships.”

Gabe’s first word was ‘ball’ and after he said it, he threw an egg into a wall, thinking it was a ball. He has been fearless in competition from his early days. Taylor recalled a story when Gabe was three years old and he saw a motorcycle go down the street. Gabe immediately asked his mom if he could have a motorcycle, but his mom said he had to learn how to ride a bike first.

Gabe grabbed a bike and rode it across the patio, crashing into the grass.

“No, he didn’t get a motorcycle after that, but he had learned how to ride a bike,” Taylor said.

Terry Tausch, All-American at Texas and NFL vet, dies at 61