Marion Edwin Stanton, 99, a longtime resident of Hayfield, Minnesota, passed away peacefully on Sunday, March 15, 2020, in Austin, Minnesota. He was affectionately known as Slim to his friends and family. He was a friend to all and will be deeply missed.

Marion was born July 4, 1920, in Vernon Township, Dodge County, Minnesota, to Vaughn and Elizabeth (Mueller) Stanton.  He attended rural schools in the Hayfield area and graduated from Hayfield High School in 1938. On Feb. 13, 1954, he married Kathleen Murphy at St. Augustine Church in Austin. 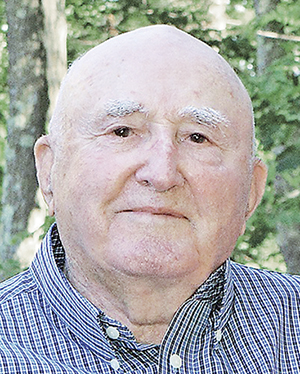 Marion was a farmer his entire life and served on the Hayfield Township Board for 35 years. He was a lifelong member of the Presbyterian Church in Hayfield. After he retired from farming, he started playing the fiddle and spent many happy hours doing that, as well as woodworking and playing pool with friends. He and Kathleen moved off their farm to an apartment in Austin in the fall of 2015, but always considered Hayfield as “home.”

Marion is survived by his wife of 66 years, Kathleen; six of his children and their spouses, Ann (Paul) Hoehn, Jean (Terry) Frahm, Mary (Stephen) Hessel, David (Kelly) Stanton, Ruth Stanton and Thomas Stanton; daughter-in-law, Debra Stanton; 10 grandchildren; six great-grandchildren; and many nephews and nieces. He was preceded in death by his son, James; an infant son; his parents; and his siblings and their spouses, Robert (Helen) Stanton, Douglas (Delores) Stanton and Mildred (Lewis) McGregor.

Due to the current health concerns, a formal wake is not scheduled. To allow family and friends an opportunity to wish Slim a personal goodbye, he will be at the Czaplewski Funeral Home in Hayfield from 11 a.m. to 2 p.m. on Saturday, April 4, 2020. Family encourages everyone to stagger their visits to limit contact with others and appreciates everyone’s understanding. Given the current restrictions, Kathleen and family will not be able to thank you in person for stopping by that day.

A memorial service and celebration of Marion’s life will be held later this summer or fall at the First Presbyterian Church in Hayfield. The family looks forward to sharing memories and extending their appreciation of your friendship in person at that time. The date and time will be published once they have been decided. Marion will be buried at Fairview Cemetery in Hayfield. Memorials for Marion may be made to either the First Presbyterian Church in Hayfield or Fairview Cemetery in Hayfield with his name noted on the memorial.

Precautionary measures and guidance in relation to COVID-19 for public needs as they apply to Austin Parks, Recreation, and Forestry... read more