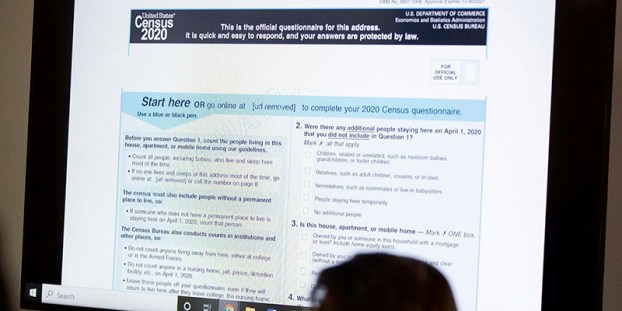 A sample of a 2020 census questionnaire is projected on a monitor Feb. 15 during a training at Voices For Racial Justice. Christine T. Nguyen/MPR News

Get ready to be counted: Census questionnaires go live on Thursday

Most Minnesota residents will have their first contact with this year’s census this week. The U.S. Census Bureau is sending out letters starting Thursday letting most residents know they can fill out the census questionnaire online.

Results from the census are used in a variety of ways, including to dictate legislative and congressional districts, said Minnesota State Demographer Susan Brower.

“It’s the way that we distribute political power,” Brower said. “If you’re not counted in the census, you may be underrepresented in those maps, which leads to diluted political power over the next 10 years.”

Census results are also used to guide public funds, as well as private spending by groups like foundations or nonprofits.

“It’s part of our civic responsibility. People want to be seen, want to be visible, want to be counted,” Brower said. “When you think of all the purposes that the census is used for, it really drives home how important it is that we don’t miss anyone.”

Groups are working in Minnesota to reach out to residents such as college students and recent immigrants who are traditionally hard to count.

This year is the first time residents will be able to fill the census out primarily online. Residents can also fill out the forms on paper, in person or by phone. The state of Minnesota has set up more than 200 centers across the state where residents can get in-person help filling out the form.

The bureau will send out reminder letters and postcards to residents who haven’t filled it out throughout March and April. Residents who don’t respond will be visited in person by census takers from the end of April until August.