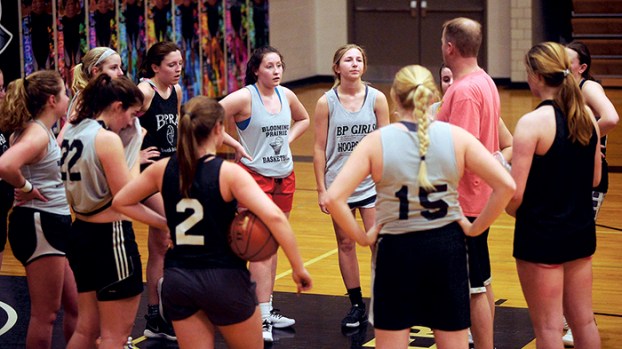 Blossoms are one step closer: BP is aiming for its first state tournament since 1999

BLOOMING PRAIRIE — Whenever senior Julia Worke walks into Blooming Prairie High School she passes the photo of her sister Madison’s team that won state state softball title in 2013 and she also walks past the photo of the 1999 Blooming Prairie girls basketball team, which is the only BP girls team to ever go to state in school history.

Worke and the top-seeded Awesome Blossoms are hoping to put another team picture on the wall when BP’s take on No. 2 seeded Fillmore Central (21-8 overall) in the Section 1A title game in Mayo Civic Center at 6 p.m. Thursday.

“It would be fun to be one of those legendary teams. I think there will be nerves, but I think we can handle it as a team,” Worke said. “It’s my senior year and I’m just going to go out there and try to have fun. The ultimate goal is to win, but most importantly we’ve got to have fun and not worry about what’s around us.”

BP junior Megan Oswald, who leads the Blossoms on both ends of the court, has her own personal motivation. Her older sister Rachael was named BP Girls Athlete of the Year last year and her older brother Mitchell Oswald took third at 220-pounds in the state wrestling meet in 2017.

“It’s a little competition in the family and we have lots of people cheering us on,” Oswald said. “Our family comes back to watch us.”

The Awesome Blossoms (21-5 overall) have locked down on defense this postseason as they’ve held all three of their Section 1A opponents under 35 points. BP, which lost three of its final six games of the regular season, has picked up its pace in the postseason — outscoring its opponents 197-85.

BP will have to keep up that defense if it wants the ball to stay rolling against the Falcons, and it will also have to be ready to beat a pressure defense. 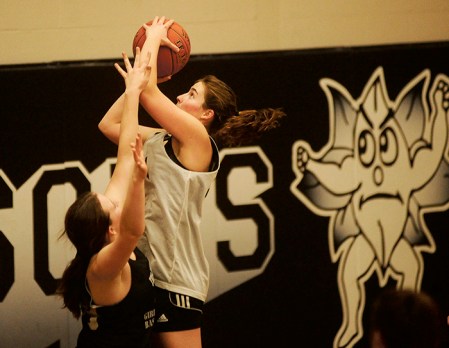 Blooming Priarie’s Megan Oswald goes up for a shot in practice in BP Tuesday. Rocky Hulne/sports@austindailyherald.com

“They play a very aggressive defense with a lot of trapping and they have a lot of speed out there,” BP head coach John Bruns said. “We’re going to have to handle the ball well offensively and if we move the ball and get good shots, we’ll be OK. If we are throwing passes weak and getting passes tipped, it’s going to be tough.”

Bruns said that FC relies on the play of its lead guard senior Kassidy Broadwater and senior Kandace Sikkink, who is one of the better post players in the area.

If BP can clamp down on those two and it keep its head clear, the Blossoms could be headed for their first state tournament appearance in 21 years.

“I think we’ve been preparing little by little all year,” Bruns said. “Whether it was the first game of the year, or a big game in the conference, we’ve made sure that we stay in the moment and take it by possession by possession. A big game like this is no different.”

The Riverland Community College men’s basketball team had its season come to an end as it lost to St. Cloud... read more