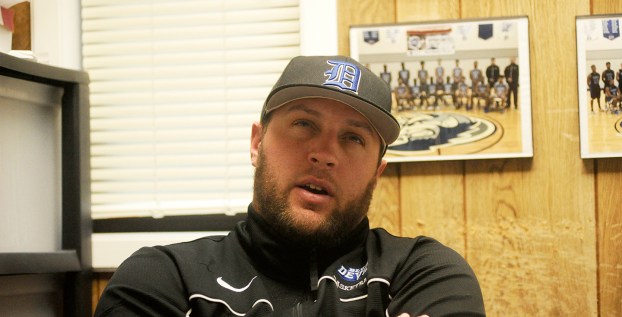 Derek Hahn speaks at his office in Riverland Community College this week. Hahn is the head coach of the Blue Devil men’s basketball and baseball teams and he’s also the school’s athletic director. Rocky Hulne/sports@austindailyherald.com

Every coach has had to deal with some sort of a heartbreak at some point in their careers, but Riverland Community College athletic director Derek Hahn had the rare and unenviable experience of tasting two letdowns in the span of a 13 days.

Hahn, who coaches men’s basketball and baseball for the Blue Devils, saw his basketball team’s season end on a 117-106 loss to St. Cloud Tech in the Regional semifinals on Feb. 29, and RCC’s baseball team saw it’s spring season end on March 13 when the NJCAA called off spring sports due to COVID-19.

“Some of these kids have put in over a year and a half and having to tell them its over was incredibly tough,” Hahn said. “You put in a lot of hours in practice and you put in a lot of time at night that nobody knows about. A lot of people think it’s just two weeks before the season when you start, but fall ball goes all fall for baseball. We start in September 1 and we do weight lifting all winter.”

The virus outbreak has also put a huge dent in Hahn’s recruiting for next year’s teams and if there is no high school baseball this spring, it would really make things tricky for players and coaches alike to see who can play at the next level. The spring season hasn’t been called off yet by the Minnesota State Hgh School League, but no games will be played before April 6.

While things are difficult right now, Hahn has built up a lot of momentum for the Blue Devils. The basketball team had a 17-year drought of not making the tournament snapped in 2014-2015, but the team has put up back-to-back seasons as a contender as it went 24-5 overall this season and took second in the Region Tournament last year. The baseball team eclipsed 30 wins last season and it was off to a promising start this year, going 3-3 against higher level teams.

“In basketball we felt like we were as good as anybody and we felt like we could’ve competed in the national tournament, but St. Cloud played great to beat us. Sometimes you’ve got to tip your cap,” Hahn said. “Losing baseball season was stressful because there was a lot of time put in with that group. Getting through it is part of life and facing some of that adversity is something that’s going to pay off dividends for these kids.”

Hahn has stayed busy with his three jobs at Riverland, but he says that’s all part of life in the NJCAA. He has to balance his recruiting trips with his practice schedules and his athletic director duties. 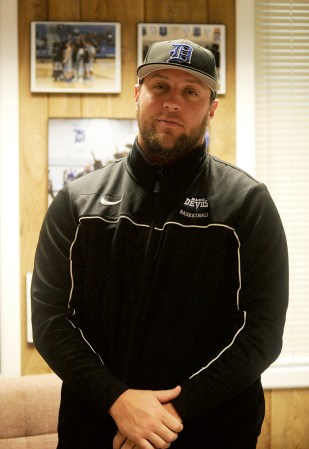 Riverland grad Derek Hahn will have a big say in the future of Riverland sports as he coaches two teams and is the school’s athletic director. Rocky Hulne/sports@austindailyherald.com

Former RCC athletic director Dave Lillemon, who also was very active in coaching and former RCC baseball coach Scott Koenigs — who Hahn played for in basketball and baseball while he attended RCC — have both served as big mentors to Hahn.

Hahn stays busy because he is driven to keep the Blue Devils near the top of the heap. He’s no longer trying to get his teams to the Regional Tournament, he’s trying to win it.

“When the basketball team snapped its 17-year hiatus from the tournament, it was like a celebration before we’d even played a game in the tournament,” Hahn said. “A great sign of progress is that is our expectation is to make the tournament and the goal has been to win the Regional Tournament in each of the last two years. We’re getting to where we want to be, but at the same time we’re not reaching our goals. The talent has expanded. We’ve been blessed with some phenomenal kids and we want them to trust that this is where they can extend their basketball careers.”

RCC will graduate a lot of key players in basketball and baseball, but Hahn is sure to be on the recruiting trail to find players who will be part of the next Riverland surge.

“A huge part of the progress is we’ve been nationally ranked in both sports several times and that’s something that people are aware of,” Hahn said.

Vikings not adding much, yet

MINNEAPOLIS  — With the NFL market now open, as teams try to make the math work to support their offseason... read more