When the Austin Packer dance team took third place and earned a medal in high kick this at the Minnesota Class AA Meet this season, it was the first time the team had earned a medal since their head coach was on the team.

Austin head dance coach Kayla Sellers was a junior in high school when her team took third place in 2006. She was named the team’s head coach just seven years later, when she moved back to Austin in 2013. Sellers has kept the Packers rolling and the team has currently competed in 18 straight state meets.

Sellers was noticed for her role with the Packers when she was recently named Class AA coach of the year by the Minnesota Dance Coaches Association.

“It was such an honor. I did not expect it. The coaching talent in Minnesota is above and beyond and so to be recognized by my fellow coaches was an extreme honor for me,” Sellers said. “This award would mean nothing without the dancers, coaches and families, including my own, my parents hardly ever miss a competition, that are a part of our program. We all work together to make APDT something special.”

Sellers was barely older than some of her dancers when she first took over as head coach of the team, but she quickly began to learn how to lead. She has made strides in figuring out what choreography, costumes and music work best and she’s also learned how to work with high school dancers. 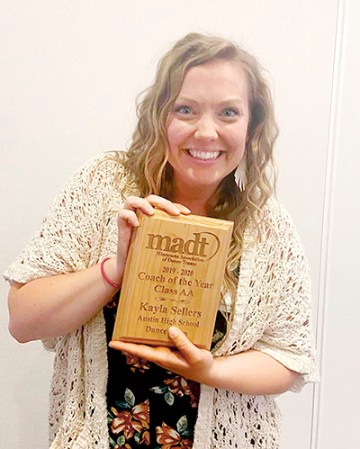 “I’ve learned how to be more patient, how to better read my athletes and know what they need in any given situation. Over time I’ve learned to always trust my gut instinct,” Sellers said. “Our biggest thing is that we are always a family first. When we have that bond it makes the necessary hard workouts and long practices seem less daunting. We talk about our goals every day and the “why” behind what we are doing. We also have fun and laugh between the work.”

Sellers has raised the expectations of the Packers in her tenure as head coach. Instead of aiming for state, the Packers are now aiming at advancing to state the finals and beyond.

“Making them truly believe that we could take it to the next level was the challenge this year,” Sellers said. “It took a lot of training our minds, but the buy-in and trust was there and it all worked out. This year we changed our mindset to we want it and we’re going to do whatever it takes to get ourselves there and there was no one that didn’t buy in. We all bought in and stayed the course no matter how hard it got and we relied on each other to get there.”

Sellers was relatively late to the dance world as she began dancing in sixth grade. But once she started getting involved in dance, there was no stopping her.

“There is no other feeling than dancing on the floor with your team,” Sellers said. “I wanted to mix my passion for teaching and my passion for dance, so coaching made perfect sense. I want to give young women the same outlet and family feeling that I had being on APDT.”

One of a Kind: BP’S Hagen grew up on sports,…