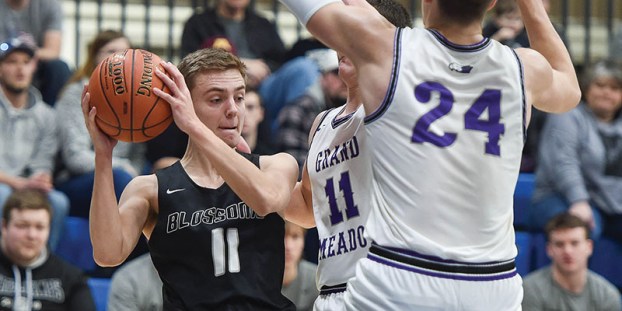 Blooming Prairie’s Zach Archer dribbles into Grand Meadow pressure in the second half of their Section 1A semifinal game Saturday at Mayo Civic Center in Rochester. Eric Johnson/photodesk@austindailyherald.com

Putting it on the line: Two determined squads in BP and Hayfield set their sights on a section title

There will be a lot intertwining scenarios and everything will be on the line when the Hayfield and Blooming Prairie boys basketball teams tip off in the Section 1A title game in the Mayo Civic Center at 6 p.m. Thursday, but Blooming Prairie senior Gabe Hagen is only thinking about revenge.

BP had its season end at the hands of the Vikings in an overtime loss last season, and they’re hoping to score a historic win with a trip state on the line this Thursday. BP’s only state tournament appearance in basketball was in 1966.

“It’s a big rivalry. They beat us three times last year and that really hurt us. We’re hoping to do that to them this year,” Hagen said. “It’s really big for us. We’re making history if we make it past this game. It would be really big for Blooming Prairie.”

Hayfield’s Luke Dudycha turns to shoot during the first half against Randolph in their Section 1A semifinal game Saturday at Mayo Civic Center in Rochester. Eric Johnson/photodesk@austindailyherald.com

BP (24-3 overall) beat Hayfield by scores of 65-40 and 59-54 this season, but the Blossoms lost forward Karson Vigeland for the year to an ACL injury in the win over Hayfield on Feb. 7. BP has gone 8-1 since Vigeland was injured, and the senior has taken on the role of mentor to his back-up Drew Kittelson, as sophomore.

“Drew’s slowly progressing into a varsity player. He’s not quite there yet, but I’m just trying to give him that extra push,” Vigeland said.

Vigeland has a special connection to Hayfield as his parents are Hayfield grads. Vikings center Luke Dudycha is his second cousin and Patrick Towey’s dad is friends with Vigeland’s dad.

Towey, a Hayfield senior guard, who made the game-winning shot over BP in the Section 1A quarterfinals last season, has also played AAU basketball with BP’s Hagen and Kaden Thomas.

“They’re very good players. I know a lot about them. Everyone has seen that Gabe is a strong player and Kaden is the shooter. They’re a good duo and we’re going to have to really stop them,” Towey said. “We always want to beat them. In football it’s tough, but in basketball and baseball we have a chance.” 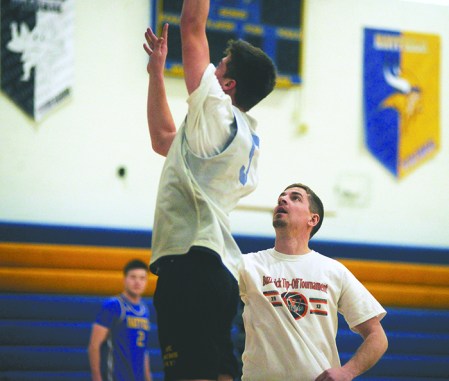 Hayfield grad and Hayfiield assistant basketball coach Tanner Kramer works on a drill with the Vikings in practice Tueaday. Kramer was an assistant in Blooming Priarie two years ago, but he’s been back in Hayfield in each of the past two seasons. Rocky Hulne/sports@austindailyherald.com

Both Hayfield and BP have grown accustomed to winning over the last two seasons. BP played in the last two Minnesota Class A State Football Tournaments and it won its first state title this fall. The Hayfield baseball team played in its first ever state tournament last spring. Both of those teams have several players on the current basketball squads.

While BP has Vigeland offering inside information about his Hayfield connections, the Vikings have an asset in assistant coach Tanner Kramer, who beat BP twice in the playoffs when he was playing for the Vikings in 2008 and 2009. Kramer, who played college basketball at Wartburg College, spent the 2017-2018 season as a Blooming Prairie assistant, coaching many of the current Blossoms.

“It was weird coaching against Blooming Prairie last year and it was weird coaching against Hayfield two years ago,” said Kramer, who works as a farmer near Hayfield. “The rivalry has probably grown since we’ve joined the Gopher Conference. In the last two years they’ve been a good team and we’ve been a good team. That enhances the rivalry. You get a feel for everybody and what they do. It’s going to be an exciting game. I can’t wait for Thursday.”

Hayfield was uncharacteristically cold from the three-point line against BP in the regular season as it wen 6-for-37 on threes in the two losses, but the Vikings (24-5 overall) have rattled off nine straight wins since the Feb. 7 loss to BP.

“We just hope we shoot better,” Hayfield head coach Chris Pack said. “We know we’re better shooters than that and part of that is their defense, but we have been shooting better recently. We hope we get those shots that we had on Saturday and we knock them down.”

To prepare for the big crowd on Thursday, the Vikings have been watching film of the 2013 Hayfield boys basketball team win the Section 1AA Tournament. That was the last Hayfield team to make it to state and it was the fourth appearance overall in the state tournament.

Thomas and the some of the other current BP players spent the 2013 postseason watching his older brother Michael and the Blossoms lose to Rushford-Peterson in the Section 1A title game. Now Thomas is hoping to do something his big brother couldn’t do — get BP to the state basketball tournament.

“We know it’s win or go home. We’re getting everybody’s best shot,” Thomas said. “We have to make good passes and play tough defense like we did against them the last two times. We want to limit our turnovers and create their turnovers. I’m excited to finally play on big stage against a pretty good team. I just hope we come out on top.”

Thomas said having Vigeland on the sideline has given the Blossoms motivation and that shouldn’t change on Thursday, when Vigeland is expected to be sitting behind BP’s bench to offer moral support.

“He’s like our best friend and every time we see him, it pushes us a little more,” Thomas said of Vigeland. “We want to do well for him.”

Both teams will try to win the turnover battle, but for Hayfield to have a chance it will have to at least contain Hagen inside. A big chunk of that responsibility will fall on Dudycha.

“We have to shut down their posts inside,” Dudycha said. “Gabe’s size makes him tough and he likes to post guys up and bury himself in there. I have to stay big and be strong against him. It would mean a lot to win against them. We’re 0-2 against them and we want to beat them in the playoffs.”

Blooming Prairie’s Kaden Thomas goes in for a layup against Grand Meadow in the second half of their Section 1A semifinal game Saturday at Mayo Civic Center in Rochester. Eric Johnson/photodesk@austindailyherald.com

Hulne: Role players lending their skills to the team effort

I’ve watched a lot of basketball over the last couple of weeks and the more I watch, the more it... read more