Virgil VanCamp, 87, of Austin, Minnesota, died peacefully in his sleep on Saturday, Feb. 1, 2020, at the Cedars of Austin. 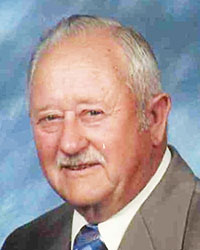 He was born on April 18, 1932, in Austin, the only child of Clarice and Glen VanCamp. Virgil married Gloria Horgan; they had one child and later divorced. He married Joyce Hemgren on Aug. 21, 1963. From this union three children were born. Joyce preceded him in death on July 14, 2013.

Virgil and Joyce raised their children on the family farm south of Austin. They were also foster parents for 19 years to many children, which enriched all our lives.

Virgil was a hard worker and drove trucks for most of his working years. After retirement, he mowed lawns and did snow removal for a few customers.

Virgil enjoyed drinking beer with his close family and friends. He also enjoyed playing and being with his children when he was not working. The favorite family game was baseball 500; he always enjoyed hitting the ball to his kids.

He was preceded by his parents; and both of his wives. Virgil is survived by his children, Sandy VanCamp of Austin, Mary (Don) Schott of Winona, Minnesota, Mark (Jeanie) VanCamp of Springfield, Missouri, and Laurie (Ronnie) Christianson of Austin; seven grandchildren; and five great-grandchildren. He will be dearly missed by all who knew him.

The family would like to extend a special thank you to Heartland Hospice for their loving care to our dad.

A memorial service will be held at 11 a.m. on Wednesday, Feb. 5, 2020, at Mayer Funeral Home with the Rev. Donna Dempewolf officiating. Friends may call from 10 a.m. until the time of the service on Wednesday at the funeral home. Interment will be in Rose Creek Cemetery at a later date. Condolences may be left online at www.mayerfh.com.