We are over half way through the 2019-2020 school year which means we are beginning to prepare for the 2020-2021 school year and evaluating resources and systems used by Austin Public Schools. 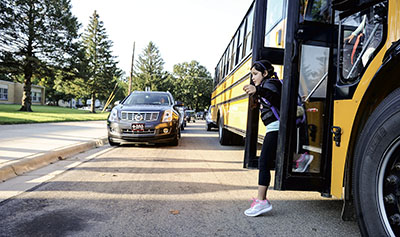 Students get off the bus at Banfield Elementary School. Herald file photo

One major component of the school day in Austin is transportation, much of which is provided by our contracted transportation company Palmer Bus. As a district, we are continually working to improve the system we have in place for transportation by reviewing and adjusting our procedures to make them more effective and efficient in meeting the needs of our students, families and the district. To that end, over the last year and half a Transportation Working Group has been meeting to look at transportation in the district.

The Transportation Working Group looked at what districts across the state have been doing to create better working transportation systems. There were many ideas for improvement, but one stood out clearly. The adjustment being considered by the Transportation Working Group is the move to a tiered bussing system.  Currently, Austin runs a single bus route system, where all age groups are picked up together and routed to their respective schools either directly or via transfer points such as Austin High School. A tiered bussing system would allow the buses to run once for grades K-6 and then a second time for grades 7-12.  This would help eliminate the wide swath of ages on a single bus, relieve congestion on the buses, remove the need for major transfer points between routes, allow for shorter bus rides, and cut down on unstructured student time before and after school.

The current transportation system allows all schools grades 1-12 to start at approximately the same time.  In order to make a tiered system work, school start and end times would have to be split as shown in the table below.

In the coming weeks, the district will be seeking input from staff, parents, and the community. Information about the proposed changes will be sent via email and parent portal and will include a feedback form. We would like to encourage parents to fill this form out in order to share your thoughts on this proposed change.

SEOUL, South Korea — Schools were shuttered, churches told worshipers to stay away and some mass gatherings were banned as... read more