A suspect was taken into custody after allegedly breaking into a northeast residence and injuring the occupant.

Cham Nygare Gilo, 21, of Austin, has been charged with a long list of offenses including:

All of the charges are felonies. He is also being held on $500,000 bond with conditions and $1 million bond without conditions.

According to Austin Police Chief David McKichan, law enforcement was called at about 12:15 a.m. on Sunday about a shooting with a victim at a residence in the 100 block of 13th Street Northeast in Austin. 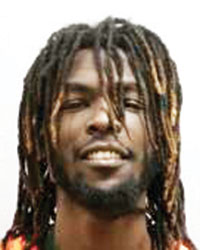 Officers made contact with a 35-year-old male who said he had a gunshot wound to his head. He reported that he opened the door of the residence and saw a masked man who forced his way into the residence. He said the man struck him in the head with the firearm and that he heard a gunshot.

A 29-year-old female roommate confirmed the victim’s story. Police located a spent shell casing and a bullet in a wall of the residence.

Police observed blood on the victim’s head where he believed he had been shot. He was transported to Mayo Clinic Health System-Austin, where it was confirmed he had not been shot and that his wound was the result of him being struck in the head with the firearm.

While at the hospital, the victim gave a detailed description of the mask worn by the assailant,.

Police canvassed the area and made contact with a neighbor who had a surveillance camera. Surveillance footage showed what police believed to be the suspect leaving a white vehicle, then returning to the vehicle and leaving the area. The footage was then sent out to other law enforcement agencies for assistance and the Albert Lea Police Department confirmed one of its officers had prior interaction with individuals from Austin driving a similar vehicle. The ALPD gave the vehicle’s information to the APD, who then located the vehicle in Austin. A mask fitting the victim’s description was seen in plain sight inside the vehicle.

Police received a search warrant and arrested Gilo as the suspected assailant. Police also arrested a 20-year-old female and a 17-year-old male, both from Austin.

McKichan confirmed the female was interviewed and released from the Mower County Jail.

Gilo is currently being held at the Mower County Jail.

While the investigation is still ongoing, McKichan said there is no threat to the public.

One fatality in snowy crash between car and semi

A 16-year-old girl died Monday afternoon after a car and semi collided on Minnesota Highway 13 south of Manchester. The... read more