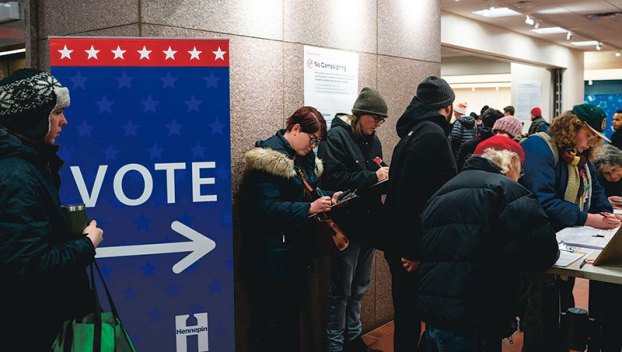 People line up to vote early inside of the Hennepin County Government Center in Minneapolis on Jan. 17, 2020. Evan Frost/MPR News

An election bill that would segregate ballots of people who register to vote on Election Day is on the move in the Minnesota Senate.

The Republican-sponsored bill for a provisional ballot system is tied to a measure unlocking more federal funding to enhance election security. The Senate State Government Finance and Policy and Elections Committee advanced it Tuesday on a 6-3 party-line vote.

The rules would apply to anyone who registers at the polls. Their ballots would be kept out of counts until additional eligibility and residency verification checks are done within a week of an election.

“Once the ballot is in the box, it’s like pouring two cups of water together — one has toxins in it and the other doesn’t. You can’t separate that water again,” he said. “The same thing goes here.”

Democrats argued it would impose new voting obstacles — and could tie up legitimate votes — when there isn’t widespread evidence of ineligible people casting ballots.

“If a person were to swear erroneously and after the fact be found out that it was a lie, they have a felony. They have a felony,” said Sen. Carolyn Laine, DFL-Columbia Heights. “This is not done light-heartedly. And as we know in the state of Minnesota it is rarely done and usually by mistake.”

Julie Hanson, who oversees elections in Scott County and is a Minnesota Association of County Officers director, said a provisional ballot system would require extra personnel to process the provisional ballots within a tight deadline. She said that could be particularly hard on smaller counties that don’t have a big full-time election staff.

“This is going to be a big deal for us. Our taxpayers are going to bear the burden of what this is going to cost,” Hanson told the committee. “Just the cost of envelopes and ballots and all of these kinds of things alone. Elections are very expensive.”

Sen. Jeff Howe, R-Rockville, said even a small number of votes can turn the outcome of competitive races.

“What is the value of a correct and accurate election?” Howe asked Hanson, before offering his own answer. “I don’t care what it costs us we should have of the utmost importance to make sure that our election is true and accurate.”

The bill would provide $4 million for one-time local grants to implement it.

Minnesota’s preregistration deadline ends three weeks before an election. Sen. Mary Kiffmeyer, the bill’s sponsor and the elections committee chair, said people who register by then undergo significant verification before they are added to rosters.

“The point is we do it before the ballot is cast and counted, not afterwards,” said Kiffmeyer, R-Big Lake.

Nick Harper of the League of Women Voters of Minnesota said same-day registrants must offer additional evidence, such as a utility bill, to prove they live in the precinct where they vote. Many who register on Election Day do so to revive a dormant voter registration or to update their name or address.

Harper said his organization is concerned about younger voters and those of color having their ballots left out, given rejection rates in states that use provisional ballots.

“We are concerned about how provisional ballots might end up disenfranchising voters rather than giving them appropriate access to the ballot,” he said.

Meanwhile, DFL Gov. Tim Walz voiced frustration Tuesday that Senate Republicans would tie up federal election security money. Minnesota lawmakers must sign off on $7.4 million in federal aid before the secretary of state’s office can spend the money, echoing a similar standoff last year over an initial installment.