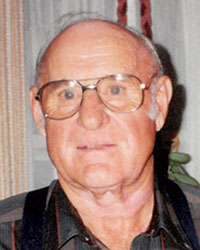 He was born Feb. 5, 1927, to William and Anna Marie (Hanson) Unverzagt near Sargeant, Minnesota. He had six brothers and one sister. He attended Koplin Elementary School in Sargeant and Elkton High School. At 17, he enlisted in the U.S. Navy during World War II and was stationed in Kodiak, Alaska. He served in the South Pacific during the war and received several battle ribbons. The LCT ship Robert served on was chosen to accompany the USS Missouri to Tokyo Bay, where the peace treaty was signed with the Japanese.

In 1945, Robert married Elaine Anderson. Robert worked at Hormel in Austin and farmed in the Dexter, Minnesota, area. After retirement, Bob and Elaine enjoyed time at the lake and winters in Texas. Robert especially enjoyed farming, hunting, fishing, time spent in nature, and his family and extended family. Robert and Elaine had five children, Robert Jr., Karen, Bruce, William and Lynette. Elaine passed away in 1996.

In 1998, he married Vivian Gilbertson in Hidalgo, Texas. They lived at The Village in Austin and later at the Cedars of Austin. Vivian passed away in 2016.

The family would like to thank the entire staff at Chosen Valley Care Center for their wonderful care during Robert’s time at the facility and Seasons Hospice for their kind and compassionate care in his last days.