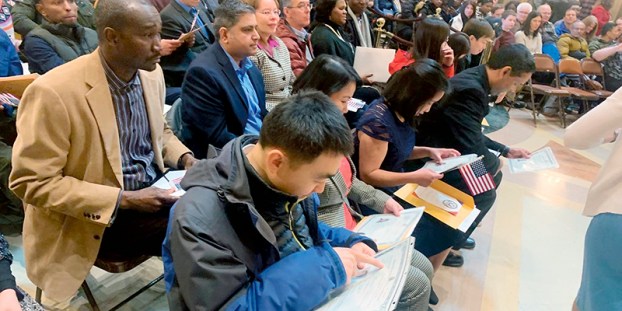 ‘Part of this country’: At Capitol, Minnesota welcomes newest citizens

Fifty-one of Minnesota’s newest U.S. citizens waved flags and recited the Pledge of Allegiance after being sworn in at the State Capitol on Wednesday.

They came from countries around the globe — almost every continent — and met federal requirements for naturalization. Whether it be for family, professional or other reasons, they settled in Minnesota and have lived here for at least three months, many much longer.

Federal Judge John Tunheim administered their oath and gave them a hearty welcome. Tunheim told the citizens and spectators in the Capitol rotunda that there have been 17,000 citizens naturalized in Minnesota in the last year.

“Citizenship is a very precious thing. I don’t need to remind each of you of that,” he said. “We have a lot of Americans we need to remind how precious citizenship is, but I encourage you all to become active, productive, contributing citizens of this country and this state.”

He urged the new citizens to exercise their right to vote and noted the presidential primary election next week. “You can vote quickly if you want to, you can start right away,” Tunheim said.

After they got their official papers, the new citizens handed in voter registration forms.

Mohit Agrawal, who is originally from India, arrived in the United States 20 years ago for an IT developer job. He lives in Apple Valley.

“I’m looking forward to voting,” he said. “What changes is my rights and my responsibilities as a citizen. I was not a part of this country’s democratic rights and now I can vote.”

“I am part of this country and I feel like I am born here because they gave me everything,” he said. “Thank you, America.”