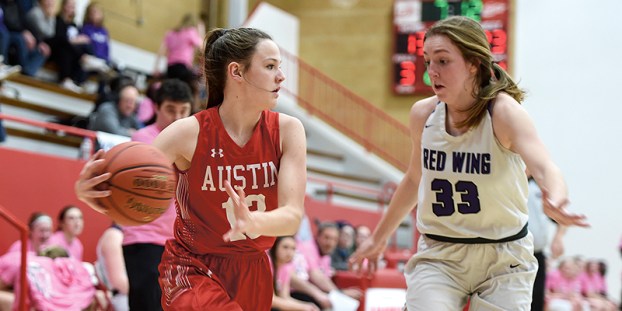 Austin’s Olivia Walsh works the outside edge during the first half against Red Wing in the first half Friday night in Ove Berven Gym. Eric Johnson/photodesk@austindailyherald.com

The Packer girls basketball team is starting to lose a grip on its mojo, and the time to get it back is right now.

Austin fell into third place in the Big Nine standings after it lost to Red Wing 63-44 in Ove Berven Gym Friday.

The Packers (18-6 overall, 15-5 Big Nine) never held the lead the entire game. Kyra Walters hit a three-pointer to bring Austin within 12-9 early on, but the Wingers responded with an 11-1 burst.

Austin put together a 7-0 run late in the first half when Erica Lundberg converted a three-point play to make it a 33-22 game, but that was as close as the Pack would get. 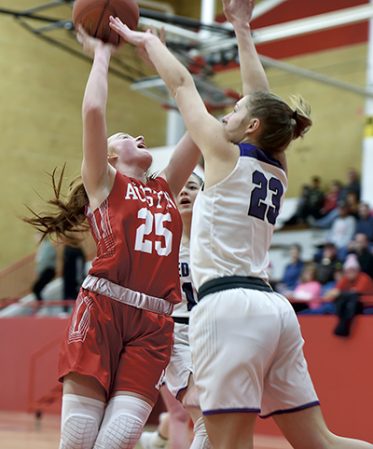 Austin’s Cassidy Schute goes in with the contested layup against Red Wing in the first half Friday night in Ove Berven Gym. Eric Johnson/photodesk@austindailyherald.com

“We knew they were going to go on a run, but our effort wasn’t there and it wasn’t at the level it needed to be,” Austin head coach Eric Zoske said. “We looked lethargic in a home game on a Friday night. That’s something I have to talk about with the team about how they thought that effort would win the game. That’s something that we have to fix internally.”

Austin had beaten the Wingers 42-34 on Jan. 7, but sophomore standout Hope Dudycha was in the lineup for that victory. Dudycha was out with an injury on Friday and it is questionable whether or not she will be back this season.

Austin, which has lost three of its last five, has two games remaining in the regular season.

“I think this is a players’ deal right now,” Zoske said. “As coaches we can continue talking to them and keep telling them how good they are, but this is something that they have to fix inside each one of them. They have to find that effort and desire collectively.”

Austin raised money to fight cancer as the game was dubbed their “Pink Out” night.

“Thanks to Red Wing for helping support Pink Out night tonight,” Zoske said. “On nights like this it’s a little bit more than a game. We hope nights like this can help benefit anybody in need.” 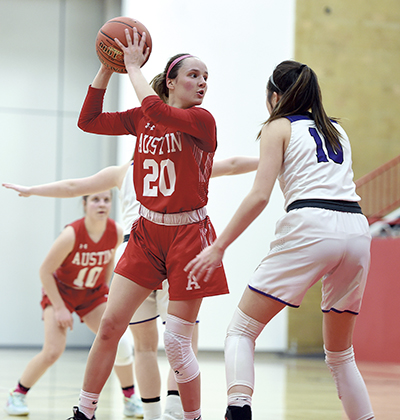 Austin’s Elyse Hebrink turns in the paint during the first half against Red Wing Friday night in Ove Berven Gym. Eric Johnson/photodesk@austindailyherald.com