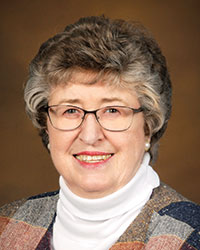 Nancy Lorraine (Thompson) Dobberman was born Oct. 29, 1937, in Milwaukee, Wisconsin, to George and Jeanette (Haugen) Thompson. She grew up primarily in Berwyn, Illinois, and Villa Park, Illinois. She attended Carleton College before transferring to the University of Illinois (Champagne-Urbana), where she was one of a handful of women in the School of Business, graduating in 1959 with a Bachelors Degree in accounting. At the University of Illinois, Nancy met David Dobberman and they were married on Feb. 6, 1960. They enjoyed 42 years together prior to his death in 2002. Their early years included time in Superior, Wisconsin, Grand Island, New York, and Bloomington, Minnesota. A job transfer for David led them to the metro Washington, D.C. area, where Nancy lived for nearly 30 years before retiring to Minnesota to be near family. In 1960, Nancy was the first woman accountant ever hired in the Deere & Co home office in Moline, Illinois. She continued working part-time while raising her family. After her eldest son went to college, she embarked on a career that included 30 years with the American Society of Travel Agents (15 of these as vice president of finance). After retiring for one month, she went on to serve as chief financial officer for the National Apartments Association before retiring for good at age 72. Nancy was a traveler throughout her life. During World War II, she travelled with her parents across the American South as her engineer father helped build new petroleum refineries. Her later career with ASTA allowed her to visit destinations on six continents, including Austria, Egypt, Taiwan, Brazil, China and Australia. She was a talented cook, an avid reader, and loved to play bridge. She and David shared a love of classical music. She was a member of PEO (Chapter BZ in Austin, Minnesota), participated in the American Association of University Women, and was a committed church volunteer. Throughout her life, she spent nearly 30 years as treasurer for the various Lutheran churches her family attended.