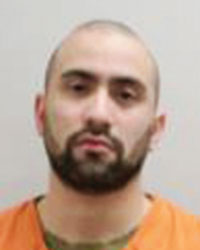 According to the court complaint, law enforcement responded to a domestic disturbance call at about 3:33 a.m. on Feb. 2 at a residence in the 500 block of 12th Street Southwest. Dispatch advised that a woman had been assaulted by Garcia-Lopez. An officer made contact with the woman outside the residence. She indicated Garcia-Lopez were inside.

An officer and a deputy entered the residence through a side door and announced their presence, but did not find Garcia-Lopez. They searched the house and found it in disarray; garbage and food were on the kitchen floor and numerous objects and clothing were scattered in the bedroom and at the bottom of the basement stairs. They then found Garcia-Lopez hiding in an upstairs crawl space.

Garcia-Lopez said he and the victim had been drinking at a bar and were arguing earlier that morning. He said he threw the trashcan across the kitchen and snapped a broom in half. He then alleged the victim broke a spatula on his head and that they started shoving each other. He admitted that she fell onto the basement stairs when he pushed her and that she hit her head when he pushed her in the bedroom. He then said he hid in the attic when he heard her call police.

An officer observed scratches on Garcia-Lopez’s arm, but did not find the broken spatula.

The victim told police that Garcia-Lopez had been abusing her all night. She said they were at a bar and he got angry because she “smiled too much” and because one of his friends was there. She said when they returned to the residence, he poured garbage on her, damaged her phone, kicked her down the stairs, pushed her and caused her to strike her head on a dresser, and strangled her.  She reported he tried to lock her in a room, then told her, “We’re both gonna die,” and strangled her with his hand over her mouth and his forearm on her throat. She said she fought back and he threw her, causing her to hit the back of her head on a dresser. When she was able to get her phone and call 911, she said his demeanor changed and he apologized and asked her not to call the police.

An ambulance crew noted several bruises on the victim’s arm and took her to the hospital. Police photographed her injuries and her damaged phone.

A review of Garcia-Lopez’s criminal record shows prior convictions for receiving stolen property, disorderly conduct and obstructing the legal process.

Garcia-Lopez will appear in court again on Feb. 13.

The Mower County Sheriff’s Office and Adams Fire Department were called out to Taopi Monday night to deal with a... read more