The Austin boys basketball team couldn’t finish off a late surge as it had its six-game winning streak halted in a 60-59 loss to Owatonna in Packer Gym Tuesday night.

Teyghan Hovland passed up a contested three-pointer on the final play of the game as he passed to Agwa Nywesh, who scored at the buzzer to make it a one-point loss for the Packers. Nywesh had missed two free throws with Austin trailing 60-57 with 20 seconds left. The Huskies (12-9 overall, 10-7 Big Nine) held him to six points total on the night.

“The defense on Agwa was really good and we’ll have to look at more things on getting Agwa involved away from the ball, so it’s not just him trying to dribble and create for himself,” Austin head coach Kris Fadness said. 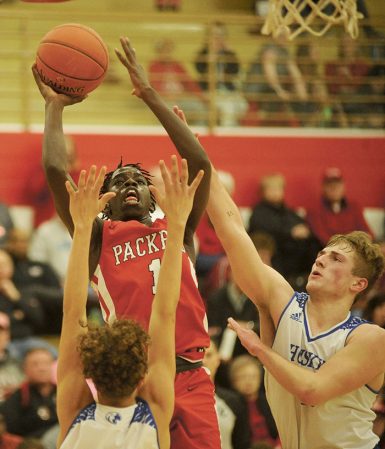 Austin’s Okey Okey fights up a shot against a double team from Owatonna in Packer Gym Tuesday. Rocky Hulne/sports@austindialyherald.com

“The Dushek kid is tough to guard and when they’re making shots from the three-point line, they’re pretty good,” Fadness said. “They’ve gotten better as the year has gone one. You’ve got to play the game and you’ve got to play it for 36 minutes. I thought this was more about them just playing better than us.”

The Packers opened the game with a 20-8 lead on senior night as Lero Oman, Tony Ciola and Jacob Venenga all hit early triples, but Owatonna closed the half on a 20-9 spurt.

“It was a nice start, but eventually the three-point shooting cost us, because eventually the well ran dry and shots were coming up short,” Fadness said. 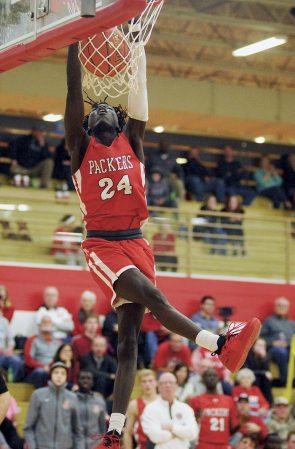 Austin’s Agwa Nywesh goes up for a jam against Owatonna in Packer Gym Tuesday. Rocky Hulne/sports@austindailyherald.com 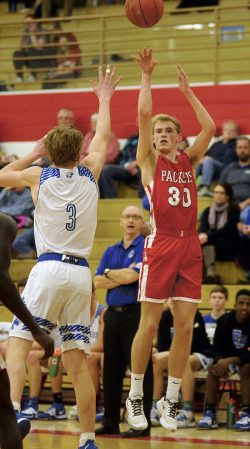