Hundreds of thousands of tons of construction and demolition waste — much of it from home tear-downs and remodeling jobs — end up in Minnesota landfills every year. But some homeowners are learning it’s environmentally, and financially, rewarding when materials from such projects are reused or recycled.

Kim Chapman LaFrence, of Grant, Minn., hired a Minneapolis nonprofit, Better Futures Minnesota, to deconstruct her 60-year-old home so she can build a new one. 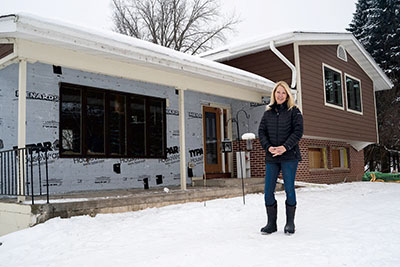 Kim Chapman LaFrence stands outside of a house that she is having deconstructed in Grant, Minn., on Jan. 30. Evan Frost/MPR News

A Better Futures crew carefully dismantled Chapman LaFrence’s house to salvage building materials for reuse and recycling. As they worked down to the foundation, deconstructors reclaimed wood flooring, cabinets, doors, windows and anything else that could be readily reused.

Everything else got tossed into a dumpster that went to Atomic Recycling for further sorting for materials such as metal from wiring and vents.

“It feels good knowing that my house is going to live on in other projects,” Chapman LaFrence said.

And she expects a tax break, too.

“They’ll take an inventory of the things that they take,” she said. “And then we’ll get an appraisal and get a tax deduction for the value of the donation.”

Last year, Better Futures did about 30 deconstruction projects. A crew of between five and 10 takes two weeks to 20 days to take apart a house. But the nonprofit says tax deductions for homeowners can make deconstruction a wash — or even cheaper than demolition. Homeowners have received tax-deductible donation credits ranging from $5,000 to more than $100,000.

With Better Futures, less than a tenth of unwanted materials from a tear-down or remodeling project may end up in a landfill.

“Almost everything that comes out of the house is going to hit reuse with the exception of things that have to get recycled,” said Jason Burbul, who recruits deconstruction customers for the nonprofit.

People are eager to buy and reuse appliances, cabinets, sinks, flooring and other reclaimed items donated to the organization and sold from its Minneapolis warehouse. Burbul estimates prices are about 30 percent of new value.

“People regularly shop it who are home renovators, flippers, artists, DIYers. You can go in and pick up a door for $35,” he said.

Better Futures also tries to help people renew their lives — by employing and training men returning to the workforce after time in prison. Melvin Stewart was part of the crew assigned to deconstruct Chapman LaFrence’s house.

“I enjoy construction,” he said. “This is the first time I’ve actually done deconstruction. You learn a lot about how different buildings are constructed, especially older buildings.”

The Minnesota Pollution Control Agency says Better Futures could pave the way for other organizations.

There are about two dozen salvage and reuse firms in the state. Some just take houses apart. Others like Habitat for Humanity and Bauer Brothers focus on reselling items salvaged from homes. But Wenzel said Better Futures handles the entire process.

Much of the debris from home tear-downs and other home projects could be reused or recycled, but in Minnesota, most of that stuff ends up in landfills, where it threatens groundwater quality.

Monitoring devices at 43 Minnesota construction and demolition debris landfills without protective liners have detected worrisome levels of arsenic and other pollutants.

MPCA is working on strategies to better protect groundwater around landfills and reduce the flow of construction and demolition debris to those sites by encouraging more reuse and recycling, Wenzel said. One working group is focusing on landfills and environmental protections, another concentrates on reusing demolition materials.

“We’re working collaboratively on systemwide change and that’s not easy, tackling some really difficult problems that have been around for a very long time,” she said. “But we need to do this. This is the right thing for us: to rethink the building system.”

That will require more recycling of building materials that can’t be reused. And at this time, there are only two Twin Cities companies that recycle construction debris: Atomic Recycling and Dem-Con.

Last year, Atomic processed about 195,000 tons of construction and demolition waste, and the company managed to recycle about 75 percent of it. During the same time period, Dem-Con processed about 50,000 tons of building waste for recycling. The company says about 75 percent of the material ended up getting to put to other uses, including asphalt paving.

Atomic uses blowers, sorters, screeners and magnets to pull concrete, stone, metal, cardboard and wood from jumbles of debris. Some of that work must be done by hand. It also extracts from the mess a mix of soil, glass and other materials that may be used as landfill cover. Concrete and stone go to repair roads and other construction projects. Wood is chipped for use as mulch and animal bedding.

“A lot of people out there say they recycle, but you can’t do what we do with a backhoe and a bobcat,” said Atomic vice president Brian Pieti. “We spent $5 million to build our facility. It ticks me off when people say they recycle and I know they don’t.”

He said his company realized in 2004 that “the future is going to be recycling” because it’s “insane” to pay to landfill material that can be reclaimed and put to new uses. And Pieti said recycling gives Atomic an advantage over other firms that haul away construction debris and pay to put it all in a landfill.

“If I’m only paying to landfill 25 percent of my material, I have a competitive edge,” he said.

To build interest, Hennepin County offers homeowners grants of up to $5,000 to offset project costs.

“It’s designed to make it more cost-effective for the homeowner to decide to salvage instead of just demo,” said Olivia Cashman, an environmental protection specialist with Hennepin County.

The county has $100,000 this year to fund grants to property owners who find new homes or uses for everything from bricks and radiators to shutters and siding.

In the spirit of Whitney: Houston Hologram tour set to begin

BURBANK, Calif.  — Whitney Houston is about to appear on the concert stage again. Eight years after her death, a... read more