Hayward man to challenge Bennett for 27A seat

A Hayward man announced this week he will run a second time for the Minnesota House of Representatives District 27A DFL endorsement against incumbent Rep. Peggy Bennett. 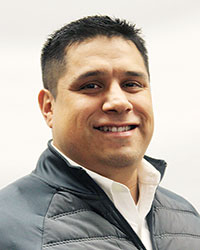 Born and raised in Freeborn County, Thomas Martinez, a DFLer, said he and his wife, Natalie, choose to raise their family in the district because they love the area as much as they do its people.

He and his wife, a lawyer and public defender in Freeborn and Mower counties, have two biological children, one child adopted out of foster care and a new baby girl arriving soon.

Martinez said he was born at Naeve Hospital in Albert Lea in 1984 and graduated from Albert Lea High School in 2002.

He earned his Associate of Science degree from Riverland Community College and is currently a biomedicine student at the Minnesota State University-Mankato. He works as a transportation driver through St. John’s Lutheran Community.

He said he wants to fight for access to quality health care, education and child care.

“I am here as an environmentalist to work toward sustainable/profitable agriculture, increasing pollinator habitat and permanent clean energy jobs,” Martinez said. “Most of all, I am running because I am a real working-class American, who believes what we accomplish here matters because southern Minnesota is  the heart of the United States of America.”

He does not support an assault rifle ban or decriminalizing illegal immigration.

He is a part of several civic organizations, such as the Fraternity of Eagles, the First Lutheran Church choir and the DNR Pool League, and is a DFL outreach and inclusion officer.

Martinez ran against fellow Democrats Terry Gjersvik and Colin Minehart in 2018 for the DFL endorsement and was ultimately defeated by Gjersvik in May of that year.

$250,000 grant will study effects of cancer treatment on fertility

Institute’s Dr. Ilana Chefetz will lead study to help young women As if cancer were not traumatic enough, there is... read more