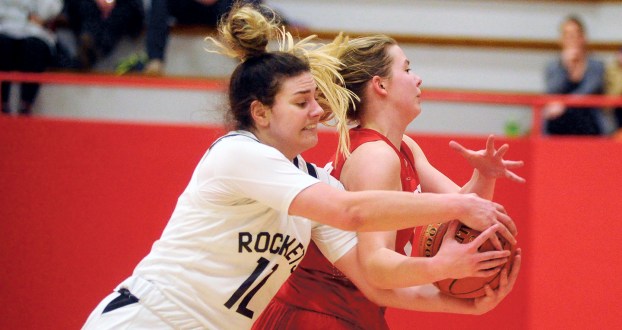 Finding a base: Elyse Hebrink leads the Pack with strong paint game

Austin junior Elyse Hebrink stands at just five-feet, six-inches tall but she was holding her own in the paint against a big Rochester John Marshall team as she vaulted the Packers to a 48-46 win Tuesday.

Austin led 48-45 after Emma Dudycha missed the front end of a one-and-one with 10 seconds left in the game and the Packers intentionally fouled JM on the ensuing possession with 2.4 seconds left. JM’s Alexa Motely made the first free throw, but missed the second on purpose. It was Hebrink who skied above all and pulled down the clinching board.

“Rebounding is all about effort and your placement,” Hebrink said. “I have a pretty good vertical too and a lot of people don’t expect it. I feel I’m able to get around them before they get there.”

Offense was hard to come by for the Packers and things got even tougher when Hope Dudycha left he game with a knee injury with 10 minutes remaining. JM (13-7 overall, 11-5 Big Nine) took a 43-41 lead when Motley hit a three-pointer with  5:52 left in the game, but Austin scored the next five and it never trailed again.

“This time of year I don’t know if it matters how you win, just a matter of if you win. We had a huge game out of Elyse Hebrink,” Austin head coach Eric Zoske said. “I was really happy with how the girls responded. That was a gritty effort and I’m pretty pleased to get a win out of that.” 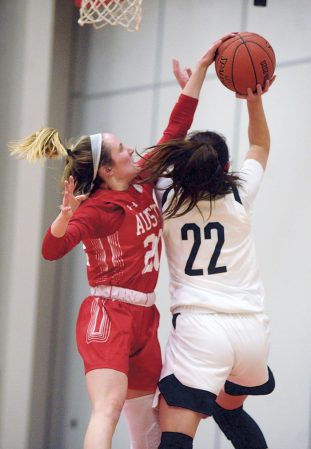 Emma hit two key free throws on a one-and-one to put Austin up 46-43 with 59 seconds left.

While things were tough without Hope in the lineup, Hebrink said the Packers had no choice but to fight on.

“We’re just trying to bring the same energy every night. We’re peaking at the right time of the season right now. It’s really tough when you lose one of your key players,” Hebrink said. “(Hope) does so much for us offensively and defensively, but I think our players off the bench stepped up and tried to replace what she does for us.”

Austin has held five of its last six opponents below 50 points and all five of those games were wins.

The Packers now have a week off before the enter the final stretch of the season. Austin has four games remaining as it continues its chase of its first Big Nine title since 2004. Three of those games are against teams in the bottom half of the conference, but there is a major showdown looming against Red Wing in Ove Berven Gym next Friday. The first place Wingers currently have a one game lead on the Packers.

“I think tomorrow we’re going to take a break and we’ll let Hope heal up. We need her on the court to be successful,” Zoske said. “We’ll fuel up the engine a little bit. We need to get healthy.” 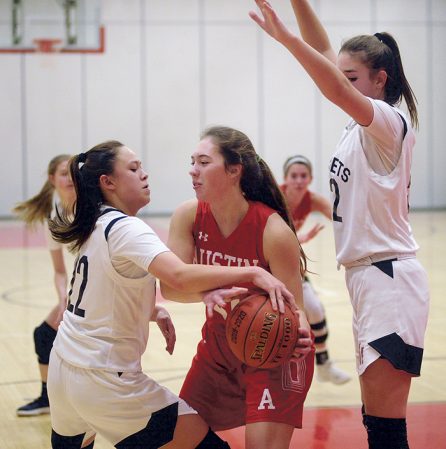