Cigarette butts. Propane canisters. Cans, bags and bottles – some full of human waste. Blocking materials. Fish carcasses. Those are just a few of the items that make up the long list of litter conservation officers have found out on the ice.

Litter is an issue throughout the ice fishing season, but it tends to be particularly problematic as the deadlines for removing fish houses from lakes loom. Shelters must be removed from inland waters in the southern two-thirds of the state by midnight on March 2 and from inland waters in the northern one-third by midnight on March 16. Different dates apply to border waters. 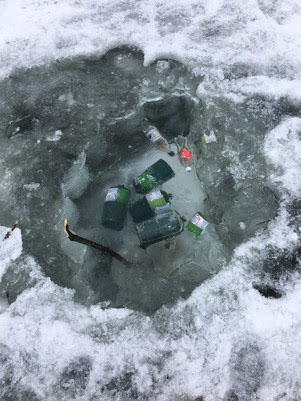 The Minnesota Department of Natural Resources in encouraging anglers to pick up their trash. Photo provided

Trash left on the ice is not only an eyesore, but it also has the potential to negatively affect water quality, especially if the litter remains when the ice melts.

“People need to clean up after themselves when they head home; the only thing they should leave is an imprint in the snow or ice,” said Rodmen Smith, director of the Department of Natural Resources Enforcement Division. “The majority of people do things right, but unfortunately there’s a subset of people who leave a mess on the ice and count on someone else to clean up after them.”

Conservation officers spend the winter monitoring anglers and documenting areas where they believe litter might be a problem. While these officers can’t watch every single fish house as it leaves the lake, every year people who leave their trash on the ice – and hope nobody notices – receive litter citations. Sometimes, it’s simply a matter of officers checking spots they suspect will be a problem. It’s also common for officers to hear from anglers upset about the trash left behind by the people they’ve fished near during the winter.

“Leaving trash on the ice isn’t a mistake or an oversight – the people who litter make a conscious decision to do it,” Smith said. “They take advantage of the fact that the majority of people care about our lakes and will clean up trash, even if it isn’t theirs.”

The Austin Public Library is an important community resource in so many ways beyond books and other traditional library services.... read more