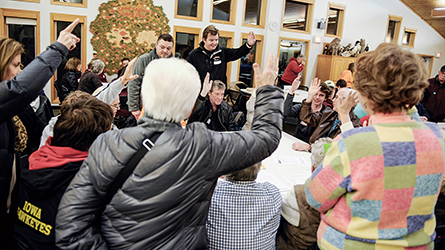 Participants in the Democratic caucus take a vote in 2016 in Ruby Rupner Auditorium at the Jay C. Hormel Nature Center. Herald file photo

As the 2020 primary/caucus machine continues rumbling forward, Minnesota will get it’s first chance, along with 13 other states, to hold its primary on March 3 — Super Tuesday.

For the first time, Minnesota will move from the traditional caucus format of straw polling and move to the primary.

But before Republicans and Democrats begin the process of determining their picks on a statewide scale, counties will hold their own caucuses this Tuesday.

The Republican caucuses in Mower County will take place in two locations: Ellis Middle School in Austin for residents of western Mower County and Grand Meadow School for those in the east side.

Cities in the west include Austin, Adams, Brownsdale, Lyle, Mapleview, Rose Creek and Waltham along with the townships of Adams, Austin, Lansing, Lyle, Nevada, Red Rock, Udolpho, Waltham and Windom.

Both locations will start at 7 p.m.

With the switch to the primary format, presidential picks are done through a state election operated by the state of Minnesota, rather than the way the caucuses did in the past. The move to the primary was made in 2016 when then Gov. Mark Dayton signed it into law.

Still, it doesn’t take away from the importance of caucuses, said Dennis Schminke, long time GOP organizer in Mower. It still provides the stage to organize at a grassroots level.

“The number one thing at caucuses this time, since there is no straw poll, is essentially this is a grassroots effort of the county,” Schminke said. “The output of the whole process will be a list of delegates to the county convention.”

The county convention will take place not long after Super Tuesday, at 9 a.m. on March 7 at the Mower County Senior Center.

This process of establishing the grass roots effort is especially important given there is no other presidential option to Pres. Donald J. Trump. In that regard, Schminke isn’t terribly worried that with the move to a state primary format, caucuses will be left behind.

“You still have the choosing of delegates and alternates,” Schminke said. “People who really care. Why? Because being a delegate gets you to the county convention. That’s how you get yourself elected to the district and state convention. It’s the easiest thing to get involved.”

Largely, Schminke said he is sold on the primary format, but that doesn’t mean he doesn’t have his concerns. The process in general has concerned several people in the state who worry about having to designate party affiliation at the time of voting.

“Probably the number one thing that a lot of people are unhappy about is you have to go into the polling place and take either a Democrat or Republican ballot,” Schminke said. “ It’s noted on the secretary voter record which one you took.”

There are also natural concerns, not limited to Minnesota, of a repeat of Iowa’s problems in the opening primary.

Still, despite what may happen with Minnesota’s primary, Schminke doubts there will be a return to state-wide caucuses, putting even more importance on the county efforts.

“What I don’t know is whether the controversy with the primary or handling the primary will result in going back to the caucus system,” he said.

Either way, Schminke stresses people to get involved and make their voices heard.

“I encourage people to come out,” he said. “It’s the start of retail politics level. This is the start of the election cycle, the start of party endorsements. If you have an idea and want a say, caucuses are a place to start.”

The Mower County DFL Precinct Caucus will be held at 7 p.m., with registration beginning at 6:30 p.m., on Tuesday at Riverland Community College, Rooms A237 and A240.

“Our precinct caucuses signal the start of the 2020 elections in Minnesota, which are sure to be some of the most fiercely contested political battles in our state’s history,” said DFL Chairman Ken Martin. “The way we win in 2020 is by organizing and building power at the grassroots level, which is exactly what DFLers will be doing in community centers and school gymnasiums across Minnesota. The DFL is a people-powered party and our precinct caucuses give everyone, from seasoned activists to the newly engaged, a chance to weigh in on the party’s platform, elect local leaders, and shape the future of the DFL. I encourage all Minnesotans to attend their precinct caucuses, engage with their neighbors, and make their voices heard.”

According to Mower DFL Vice Chair Nancy Bakke-McGonigle, the primary issues that will likely be discussed for the party platform are:

• Healthcare – “We foresee a lot of discussion on this,” Bakke-McGonigle said, noting that the rural healthcare crisis and its effects on farmers is a key part of the Mower DFL’s platform.

• Social Security – “We have a member of the (DFL) board who is very knowledgeable and has kept us informed on this,” Bakke-McGonigle said.

• Environment/Climate Change – “We’ve been hearing from a lot of environmental groups that will caucus for us,” Bakke-McGonigle said.

• Agriculture – Caucus attendees will discuss the economic impact on small farms and means to address the needs of small farms.

• Unions – Bakke-McGonigle said she expects different resolutions regarding unionization to be brought forward during the caucus.

While attendees will learn more about this year’s DFL candidates, there will not be as many as in past caucuses.

“We will be having candidates caucus, such as Dan Feehan,” Bakke-McGonigle said. “We expect (Rep. Jeanne) Poppe and (Sen. Dan) Sparks as well. It looks as though there isn’t going to be a lot of opposition for these positions, so it won’t be quite the way it was in 2018 when we had a lot of candidates.”

Bakke-McGonigle noted the major difference this year from previous caucuses is that they will not be involved in the presidential caucus.

“I’m hoping there will be a lot more participation this way too, as far as the primary is concerned,” she added.

Bakke-McGonigle said that anyone is welcome to attend, though to participate, you must be a resident of a Mower County precinct. Those that wish to be delegates to the DFL County and State Conventions must be members of the DFL.

— Eric Johnson and Michael Stoll contributed to this report

The Neveln Elementary Jumprope club got a chance to show off its skills Friday morning while at the same time... read more