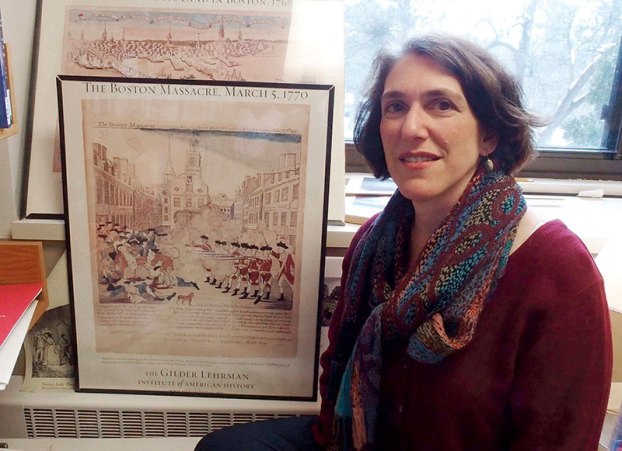 History professor and director of Carleton College’s American Studies program Serena Zabin in her office with a copy of Paul Revere’s engraving of the Boston Massacre. Zabin spent the last 10 years researching the social realities behind the incident. Euan Kerr/MPR News

You probably learned in history class that the Boston Massacre of 1770 is one of the foundational moments of the American Revolution. Now a Minnesota history professor is arguing in a new book that what happened on that evening almost exactly 250 years ago has been deeply misunderstood.

Long before the Tea Party, Boston was a tiny town known as a center of trade for goods coming in and out of British North America.

“What we know is that on March 5, 1770, there’s a lone sentry who is in front of the Custom House in the center of Boston,” said Serena Zabin during an interview in her office at Carleton College, where she teaches history and directs the American Studies program.

When a group of citizens begin harassing the sentry, he calls for help, she said. Soon, eight British redcoats arrive and order everyone to leave. They don’t.

“At some point, someone yells, ‘Fire!’ And the soldiers fire,” Zabin said. “And when the smoke clears there are four Bostonians dead on the street and a fifth one dying of his wounds and several others are wounded. And that is the event which becomes known as the Boston Massacre.”

Central to this is Paul Revere’s famous etching of the event. A framed copy sits on a shelf near Zabin’s desk. It depicts an officer ordering the line of soldiers to shoot into the crowd — a powerful image that has been a staple of history books.

“It’s almost the only picture we have from British North America from this period,” she said.

Zabin describes in her book, “The Boston Massacre: A Family History,” how Revere meant the image to be inflammatory, showing citizens suffering under the whims of a distant power.

However, her research found a different, much more messy, story.

It began with a political flyer distributed in Boston in the days following the shooting. Zabin found a copy in Carleton’s own collection.

“And I brought my students to look at it actually for several years, and we read it, before I really paid any attention to it,” she said.

It was a contemporary account of some of the evidence gathered after huge numbers of people came forward to testify as to what happened that night. One witness is described as a soldier’s wife.

Histories of the time were written by politicians and military men. They focused on what interested them, and that didn’t include wives and families. It turned out there were many women and children — as well as a lot of soldiers — all crammed into what was then a very small Boston.

“It was not a big place,” said Zabin. “At that point, it was about a square mile.”

There were 16,000 Bostonians, and they were upset. First, two regiments of British troops arrived. Then, their commanding officers ordered the 2,000 soldiers — and the 500 women and children traveling with them — to find lodging in the already-crowded town.

Zabin wanted to get a better idea of the societal impact, so she began going through the records: marriages, births and baptisms. She also went to London and researched the regimental muster rolls. She put it all in a database and cross-referenced names with other historical records.

Zabin argues that what happened in Boston was far from the clash of strangers as it has been depicted historically. Instead, she said, it was a fight between neighbors.

She found accounts of socializing between Bostonians and military leaders both before and long after the Massacre. She found records of local women marrying soldiers and soldiers quietly slipping away from their regiments to become colonists. The Boston Massacre was less of a political event and more of a messy divorce.

Zabin will launch her book at the Content Bookstore in Northfield and then read at the Magers and Quinn Bookstore in Minneapolis on Feb. 27. She said she hopes readers will see that a lot of history supposedly carved in stone may not be.

“This history of the U.S. founding actually is much more dynamic and much more human and much more emotional than we tend to think of it. And it’s a lot more interesting,” she said.

Computer scientist who pioneered ‘copy’ and ‘paste’ has died