Calm on the court: Slaathaug continues growth in win over Mabel-Canton

HAYFIELD — It’s been a frantic February so far for Ethan Slaathaug and the Hayfield Vikings, but the team was able to catch its breath in a 78-49 win over Mabel-Canton in Hayfield’s final regular season home game of the season Thursday.

Hayfield senior Patrick Towey finished with a career-high 31 points to along with five rebounds, five assists and three steals on senior night and Slaathaug finished with 28 points, four rebounds, five steals and five assists. Slaathaug, a junior, also hit a big milestone when he scored his 1,000th career point on his sixth point of the game — one of his many drives to the hoop.

While it’s a rare accomplishment for a junior to hit 1,000, Slaathaug kind of knew the number was drawing near.

“My little brother was going around telling everybody it was coming. He’s a little bit of a show-off so I knew it was coming. I’m thankful for the players and coaches that have helped me get to this achievement. It means a lot,” Slaathaug said. “We’re moving the ball around and we’re working as a team. It’s going well lately. We’re all team players and we all want what’s best for our teammates.” 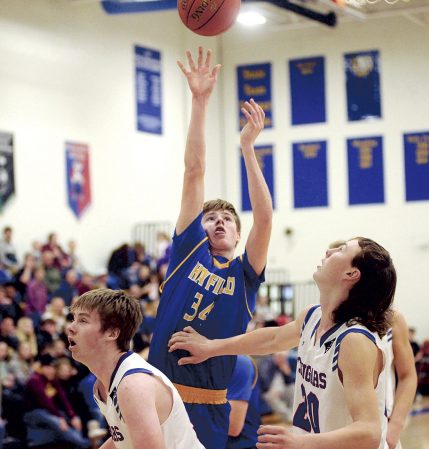 Hayfield’s Ethan Slaathaug goes up for a shot in the paint against Mabel-Canton in Hayfield Thursday. Slaathaug, a junior, scored his 1,000th career point in the win. Rocky Hulne/sports@austindailyherald.com

The Cougars (3-21 overall) hung around early on as the game was tied at 21 in the first half, but Towey ignited a 7-0 Hayfield spurt when he hit one of his seven three-pointers and the Vikings (18-5 overall) never trailed again.

Hayfield was short-handed against the Cougars as starters Easton Fritcher and Luke Dudycha were both out with illnesses.

“It was tough to hear in the morning that Luke and Easton weren’t feeling great,” Towey said. “They just said ‘good luck’ to us. Ethan and I had a little conference during the day because it’s not easy to lose to starters in a game and we really had to step up and do whatever we needed to do.”

Before the win over M-C, Hayfield’s last three games were decided in the final minute and the 55-53 win over Triton and the 56-55 win over United South Central both required late-game heroics from Slaathaug, a junior, who is now averaging 24 points through six games in the month of February.

Hayfield head coach Chris Pack said when he saw Slaathaug this summer, he knew that he was going to emerge as a go-to scorer for the Vikings. Slaathaug, who grew three inches over the summer, averaged 12 points per game last season and he’s averaging 22 per game this year.

“He’s got that knack to get into the paint and he’s really good at that little five- or 10-foot shot,” Pack said. “He’s way more explosive this year and he’s put in a lot of time to get better. He doesn’t shy away from contact anymore. He goes at people.”

Hayfield used a shot clock for the third time this season in the win. The MSHSL is allowing schools with shot clocks to use them in non-conference games if both teams agree to use it.

“I think it’s going to come eventually and it’s nice for us to get used to it for whenever it does come into play,” Pack said.

Hayfield will play at Faribault Bethlehem Academy at 7:15 p.m. Friday and it will play at Schaeffer Academy and Maple River next week before it begins postseason play.

There is a high chance that Hayfield and Blooming Prairie, which swept the Vikings this year, will be the top two seeds when the Section 1A Tournament begins on Feb. 24. 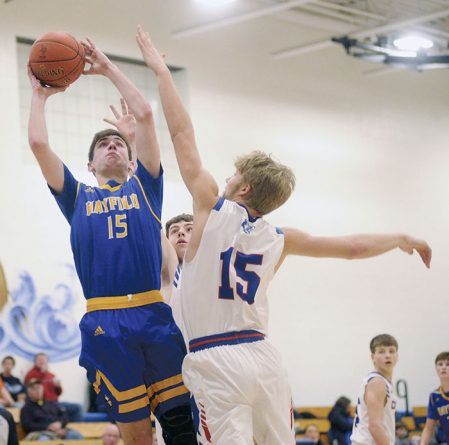 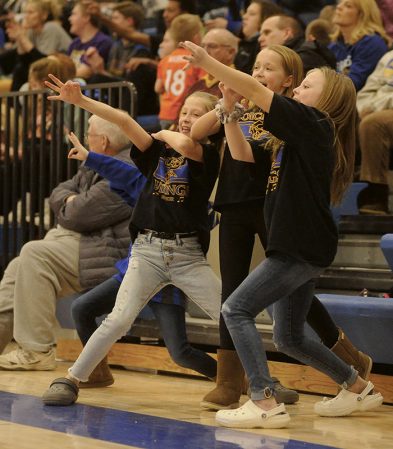