When Austin senior Ellie Eyre moved to Austin 10 years ago and enrolled in Banfield Elementary as a second-grader, she instantly started a friendship with her classmate Meg Barinka.

Barinka, who is on the autism spectrum, started dancing in fifth grade, the she immediately became closer with Eyre. The two instantly became each other’s motivators and they continue to push each other to this day. Eyre is now a captain on the state-bound Austin Packer Dance Team and Barinka is an alternate who had to put in more work than most just to make the varsity team for the first time this season.

“Meg has definitely worked extremely hard to get to where she is now,” Eyre said of Barinka. “I have been privileged enough to watch her since the beginning when we started dancing together. We’ve been alongside each other for the long run and to watch her make varsity this year, she’s definitely come full circle. To watch her grow has been outstanding and I know that having her with us at state is going to bring positive energy to our team, just as she has all season.” 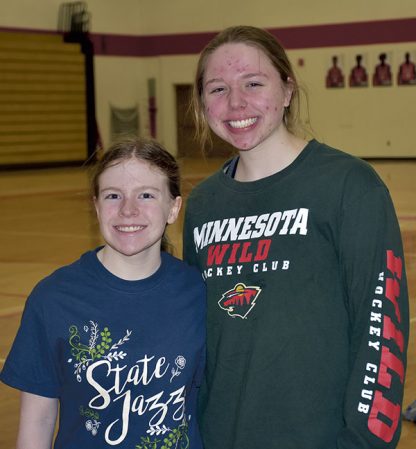 Austin seniors Mega Barinka and Ellie Eyre have remained lifelong friends through dance. Eyre is a captain on the Packer dance team and Barinka, who is on the autism spectrum, is an alternate. Rocky Hulne/sports@austindailyherald.com

Just three years ago, Barinka could barely kick to her waist in a sport that involves kicking up to your face and she though double turns were an impossibility. That’s when she found herself under the wing of 2017 Austin grad Madison Klein, who is now a captain on the Minnesota State University dance team.

Barinka worked with Klein after practices and in the offseason. She also put herself through workouts at home as she improved over the years.

“I’ve been pushing myself really hard to be on that team. I did lots of workouts at home and I worked with former dancers outside of practice,” Barinka said. “I’m capable of more than I thought. I pushed myself out of the comfort zone.”

When Klein saw Barinka dance last week in Austin, she found herself tearing up. Klein recalled Barinka saying she wanted to be an APDT varsity dancer on the day they met. After a long journey, Klein was thrilled to see Barinka’s dream become a reality this season.

“I told her it is not easy to be on that team and it is not going to be handed to her. She was ready for the challenge and ready to work for it,” Klein said. “I was not easy on Meg when I worked with her as I know how coach Kayla (Sellers) is. She is not easy on those varsity dancers. Some practices were very tough for Meg but she always came to the next one ready to work. Meg is a very quiet girl, but boy does she have a big personality. I can tell dance is something so special for Meg as it is a way she can express herself without having to talk.” 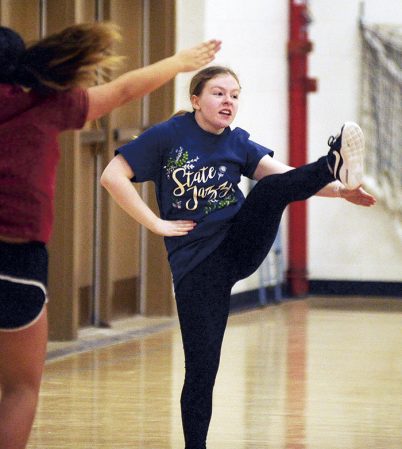 Austin senior Meg Barinka goes through the kick routine at practice in Packer Gym Wednesday Morning. Barinka, who is on the autism spectrum, worked her way up to the Austin Packer varsity dance team this year and she will serve as an alternate as the team competes in the state meet in Targe Center in Minneapolis Friday and Saturday. Rocky Hulne/sports@austindailyherald.com

Barinka used to play softball and she served as the volleyball manager this past fall, but she truly shines when she is on the dance floor. She’s hoping to motivate her team to a big-time performance at state this weekend.

“When I’m dancing, I just tune out the noises and I block out everything expect the music,” Barinka said. “I think (state) will be really fun. I want to see us get into finals and get a medal.”

If Klein had to sum up Barinka in one word, she would call her determined. She has seen enough out of Barinka to know that great things lie ahead of her in life.

“Meg is such a special girl and I am so blessed to have worked with her,” Klein said. “She has such a bright future ahead of her and I cannot wait to see what it holds. She has taught me things that I will carry on forever and I will cherish our practices forever.”