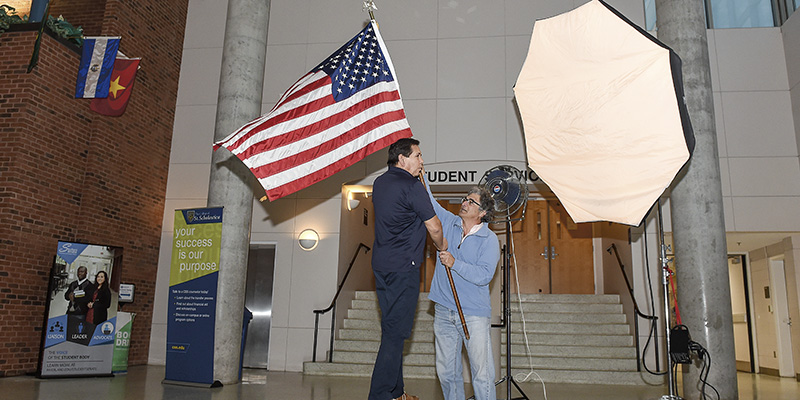 William Taufic makes an adjustment while setting up a shot with Miguel Garate at Riverland Community College. Taufic’s project “Our Austin, Our America” is a story of inclusion within the community of Austin. Eric Johnson/photodesk@austindailyherald.com

The Austin Human Rights Commission and the city of Austin will play host to the Welcoming America’s Community Visit Program on Monday, March 16.

Welcoming America is a non-profit, non-partisan national organization that believes being an inclusive community contributes to prosperity and that all residents are vital contributors to their community, according to the Welcoming America website.

The group will meet with officials and the public to discuss what people from across the nation are doing to make their cities welcoming, as well as what initiatives are occurring in the community.

“Southern Minnesota is leading the way in rural Welcoming and is an area that is rich both in economic programming and cultural engagement,” its press release said. “Both (Austin and Winona) cities receive immigration legal services through the Immigrant Law Center … (and) Austin’s Welcome Center has been a leader in community-driven services and the annual Taste of Nations cultural celebration.”

The visit will highlight:

• And partnerships with the city of Winona, Minnesota Marine Art Museum and the Welcoming Table.

The visit, which will last a day and a half, will be one of four taken by the Welcoming America’s group. In addition to Austin and Winona, the group will visit the communities of Dallas, Texas and Portland, Maine.

The public is invited and coffee and cookies will be provided.

A Clean Life: After a life of struggling with…