Austin native Jeff Mueller was named to the Hy-Vee Hall of Fame last month. Mueller, district vice president for Hy-Vee’s west central district, was inducted as the 2019 District Vice President of the Year at the company’s annual stockholders’ meeting in December. 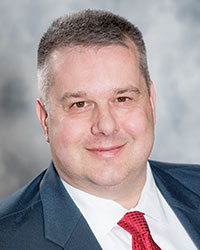 “Jeff is a hardworking and intelligent leader for our entire district vice president group,” Gosch said. “He has been asked to lead in a number of areas and always jumps in to help the stores improve. He digs in, finds the issues and gets them fixed. He clearly defines goals for his area and works with the directors to achieve those goals and help our entire company improve.”

Mueller’s career with Hy-Vee began in 1988 at the Austin store as a part-time checker/stocker. He moved to Rochester North Hy-Vee in 1990 and became a full-time aisle coordinator before transferring to New Ulm in 1991. He then moved to the Williamsburg Hy-Vee in Lincoln, Nebraska, in 1993 where he gained a great deal of experience serving in the role of shift manager, food store manager, manager perishables, manager general merchandise and manager store operations. Mueller’s first store director assignment was the Stony Brook Hy-Vee in Omaha in 2007, and he led the team at Marshall, Minnesota, from 2011 to 2014. In 2014, Mueller was promoted to district vice president, western district. He became vice president, food service/restaurant development, in 2015 and then transitioned to a district vice president in 2018.

Born Nov. 19, 1938, in Albuquerque, New Mexico, Louis Richard Rocco moved with his family to a housing project in... read more