Dallas Clinton Britt, 35, of Austin was sentenced to 93 months in the Minnesota Correctional Facility in St. Cloud for felony third-degree criminal sexual conduct – force or coercion. He received credit for 214 days served. 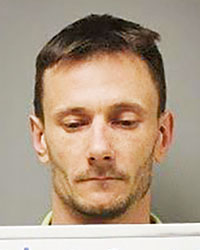 Charges of first-degree criminal sex conduct – penetration or contact – cause personal injury, felony kidnapping – to facilitate felony or flight, felony false imprisonment and felony criminal sexual predatory conduct were dismissed at the sentencing as part of a plea agreement reached on Oct. 22.

Court documents state that the victim agreed to meet with Britt, whom she had only interacted with via Facebook Messenger, on Jan. 29, 2019. She had declined previous invitations to meet, but Britt told her he had a hotel room in Albert Lea, where the victim lived. He asked her to come by and she declined, though she eventually agreed to let him come to her apartment. When he arrived, Britt told the victim that he needed to check out of the hotel and said she should come with him, saying that other girls would be joining them later. She agreed and brought her dog with her.

They arrived at the hotel and Britt went into the room while the victim and her dog waited in the car. While she waited, Britt sent her a Facebook message telling her to come to his room. When she declined, Britt told the victim it would be awhile. Because it was below zero outside and she had no one to pick her up, the victim agreed to go into Britt’s room with her dog.

While in the room, Britt made advances on the victim, though she said they had never discussed anything sexual in nature. He told her he had purchased thong underwear and a pornographic DVD the night before and showed her a pornographic magazine. Britt then overpowered the victim and raped her.

Two other women, one of whom had met Britt the night before, knocked on the door to the hotel room because they were planning to go to a casino with Britt. One of the women had witnessed Britt arrive at the hotel and had messaged him about going to the casino, to which Britt replied, “just come up.”

The woman saw the victim, who was crying and appeared to be in pain. She asked if Britt had raped her, to which the victim responded “yes.” She then retrieved the victim’s clothes and gave them to her in the bathroom. The victim dressed, took her dog, and went to wait by the elevator. Britt did not say anything to the victim when she left the bathroom, but asked the two women if they were mad at him.

One of the women drove the victim to Mayo Clinic Health System-Albert Lea, where an examination showed the victim had sustained injuries.

Police searched Britt’s room and found a pornographic magazine, DVD, various pairs of thong underwear and Britt’s cell phone, among other items. A search of Britt’s phone showed Facebook contact with 146 women on Jan. 29, 2019, including the victim, attempting to hang out or do something with them.

A review of Britt’s criminal record shows prior convictions for domestic assault, violating an order for protection, forgery with intent to defraud, violent felon in possession of tear gas and third-degree criminal sexual conduct.

The Austin City Council will vote during its next regular meeting on whether or not to approve a quote from... read more