Austin Area Angels will work to bring together early start-ups with investors to help with funding. 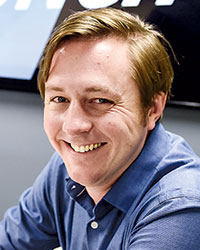 “We saw this as an opportunity to bring people together, people who are all interested and excited in entrepreneurship, and present them with companies they wouldn’t be aware of otherwise,” said Sean Williams, ecosystem builder at ACGV. “What we’re doing is providing a forum for these companies to present to investors.”

AAA arose with the acknowledgement by ACGV that there was no formal network of investors in Austin. Creating this pathway for collaboration will allow for that direct pipeline that will kick start small business owners in Austin.

ACGV set it up so that AAA will focus on four primary areas: food science, agricultural innovation, biosciences and local startups in other areas.

“The long term goal is to help with building up the entrepreneurial ecosystem in Austin … educate on the benefits of entrepreneurship as well as attracting businesses to town that might not consider Austin otherwise,” Williams said.

AAA was formed at the end of 2019 and officially launched in January.

The first informational meeting will be held from 5:30-7 p.m., March 11, at The Hormel Institute. This will be primarily for potential investors and interested professionals.

There are two tiers of investors: The first tier is full membership investors, who must be accredited with the Securities and Exchange Commission;however, if a person would like to learn more about becoming a future investor,  there is the second tier of membership — associate membership.

The first round of presentations is set for Wednesday, April 1, continuing on the first Wednesday of every month after that.

“We will prescreen companies looking for funding and work with those companies with their presentations,” Williams said. “We will schedule them to present to the members ship and then it’s up to each individual member if they want to invest or not. We’re facilitating that networking.”

Anybody interested in Austin Area Angels can visit www.AustinAreaAngels.org or email info@austinareaangels.org.

On top of Austin Area Angels, ACGV has announced that it has become part of a collective of six cowering spaces across southeastern Minnesota designed to allow members to spread resources where needed.

This program, called the Greater Minnesota Coworking Passport, will allow somebody who is part of the Launch Coworking Space in Austin to work in any of the other five member locations using a “passport” system.

For $99, members can redeem it for up to five times in other locations, which includes Mogwai Collaborative in Mankato, Launch in Austin, Collider Coworking in Rochester, Pi-Co Works in Pine Island, Red Wing Ignite in Red Wing and the Garage Cowork Space in Winona.

A monthly passport for $250 will give members unlimited access to participating spaces during posted “drop-in” hours.

The program got its start from a three-way conversation between Launch, Mogwai and Collider. The motivation came from allowing members who don’t have a set office to work from wherever it was convenient for them.

“That was kind of what motivated that in the first place. Hearing our members say that ‘I’m working from so and so,’” Williams said. “They are already working in these areas. It gives them a home base where they are working anyway.”

More locations are expected to join the collaborative down the line.