When George Hormel and Lillian Gleason planned their wedding for Feb. 24, 1892, I doubt they gave any consideration to the fact that it was a leap year.

But, apparently some countries have built customs related to romance and marriage in honor of the every four year occasion. Both Ireland and England have traditions regarding marriage proposals on Leap Day, and in Greek culture it is considered bad luck to marry on Feb. 29. 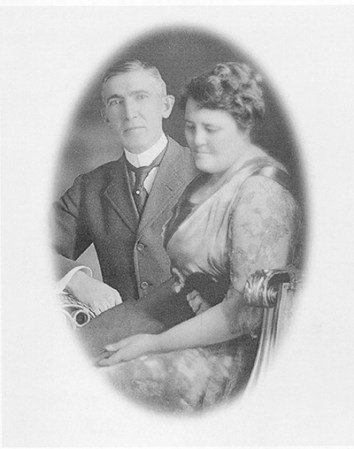 Julius Caesar, aided by astronomer Sosigenes of Alexandria, is credited with modifying the ancient Roman calendar to account for the extra minutes it takes for the Earth to revolve around the sun each year. How they figured this out and then communicated the change to the rest of the world is beyond my little brain. And apparently another adjustment is expected every 3,030 years, according to history.com.

Last week, George and Lillian Hormel would have celebrated their 128th anniversary.  They were a well-regarded couple as described in the excerpts below.

A longtime family friend wrote the following of Lillian:

“Apparently realizing, even as a girl, that upon her marriage she had a difficult and dynamic personality to deal with in Geo. A. Hormel, she used her talents, which were many, for the primary purpose of holding him on an even keel; at the times when he was the most nervous, upset, distraught and explosive, her attitude and demeanor would be calm, soothing and smooth.”

An Austin newspaper reported that:

“After the wedding Mr. and Mrs. Hormel were escorted by their friends to their home on St. Paul Street, where they will go to housekeeping….their popularity is so well established that it is useless to say anything upon the subject.  Life must look very bright for those young people launching out upon the sea of life with such fair skies and smooth seas.”

At the 1946 annual stockholders meeting, Jay Hormel said of his parents:

“Mr. and Mrs. Hormel had that typically American character which goes beyond doing no evil.  They asked few favors of other people but were always sensitive to the needs of others.  The principles of ‘sow and ye shall reap’ and ‘give and you shall receive’ were firmly implanted in their minds.  Surely their lives were marked by doing well by giving.  Theirs was the character and the religion which is America and which makes America great.”

George and Lillian were married just over 54 years, and 13 of those were leap years. Philosophically speaking, this extra day gives us all another day to live and be with family, friends, and communities. George and Lillian shared 13 extra days together. Wouldn’t we all take that if we could!

To all the Leaplings born on Feb. 29, happy birthday.

The Benefits of Music Therapy, presented by Healing Rhythms

Free for members of the HHH, Mower County Historical Society and Friends of the Library, $5 for non-members.