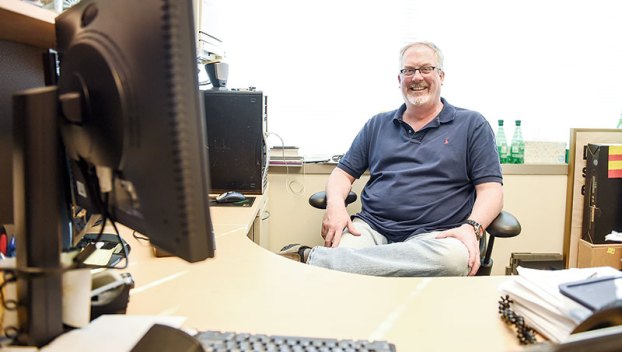 Dr. Ted Hinchcliffe was recently a part of a massive grant distribution for his work on pediatric brain cancers in conjunction with the Mayo Clinic. Eric Johnson/photodesk@austindailyherald.com

A grant worth nearly $1 million dollars will help a collaborative effort between scientists at The Hormel Institute and Mayo Clinic to help determine the cause, and by extension treatment, of aggressive brain cancers in children.

Dr. Ted Hinchcliffe is leading principal investigator for the Mechanistic Dissection of the K27M Histone Mutation in Pediatric Gliomagenesis study, which will look learn about errors in cell division that cause brain cancer in children.

It will also work to discover why these tumors are so aggressive to the point that once its diagnosed there is little else that can be done.

“We’re looking at what is the root cause of a specific pediatric brain tumor,” Hinchcliffe said from his office at The Hormel Institute late last week. “We’re trying to figure out these terrible tumors because once it’s diagnosed it’s less than a year. There is no cure, no treatment.”

Hinchcliffe is the leader of the Cellular Dynamics lab at the Institute and, along with  Institute scientist Dr. James Robinson, leader of the Cell Signaling and Tumorigenesis lab, is pairing up with a pair of physician/scientists at Mayo Clinic: Drs. Jann Sarkaria and David Daniels.

“This is extremely important because it provides a link between the basic science research at The Hormel Institute, to the transitional/clinical expertise at Mayo,” Hinchcliffe said in a press release last week. “This collaboration builds on the strengths of both institutions, and will help transform research into DIPG, one of the most devastating pediatric brain cancers, which currently has few treatment options.”

The collaboration came about through a shared interest between Hinchcliffe and Daniels after they discovered they were researching in the same areas.

“I blundered into brain research as a cell biologist,” Hinchcliffe said.

As they began talking more, they decided to push the collaboration forward, bringing the research strengths from opposite sides of the problem together.

It’s the first time that such a massive study has taken place between the two entities.

“We have had cooperative partnerships,” Hinchcliffe said. “There have been some intersections and we certainly encourage people to go back and forth with mayo, but over the years this is the first big one.”

Essentially, the study between the scientists is looking specifically at the root cause of these diseases, which is important because of how these tumors like DIPG work.

Instead of a tumor, the cancerous cells of DIPG snake out and radiate throughout the brain, rather than forming a central mass. This eliminates surgery as a viable treatment and radiation at best will only lengthen the lifespan.

While DIPG is one of the rarer cancers, occuring in only around 100 cases annually, it makes up for that rarity in how vicious it is.

However, the study behind these brain cancers is optimistic. The study is already at a point where the scientists are proposing clinical trials and generated data is could generate ideas of targeted therapies in the next three years.

It gives Hinchcliffe hope for further studies in the future.

The important part is we’re taking the strengths of what we do here and what they do at the Mayo Clinic. How do they bring them together and use the best of resources in Minnesota?” Hinchcliffe added.

This collaboration is one of several between scientists at The Hormel Institute, Mayo Clinic and the University of Minnesota to receive grant help. For more on those grants, visit: www.austindailyherald.com/2020/02/minnesota-partnership-targets-cancer-and-neurological-disease/

Despite the event being pushed back a week due to weather, more than 500 people, one of its biggest crowds... read more