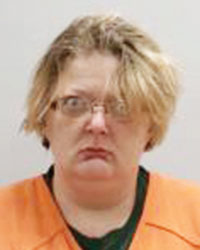 According to the court complaint, police responded to a call of an assault at about 5:18 p.m. on Jan. 14 at the Austin Walmart. Dispach advised that the involved parties were walking away from the store and yelling at each other in the area of 10th Street Northwest.

Police made contact with an adult male, a juvenile male and Denhof. The adult male told police Denhof had struck him with her fist. An officer observed the adult male’s right cheek was red and swollen.

Police spoke to Denhof, who said she and the adult male were arguing and that he grabbed the juvenile male by the arm. She said she punched him in the right arm so he would release the juvenile. The officers saw that the juvenile looked upset and noted that Denhof was yelling as she told her version of events. They also observed that she had no visible injuries.

An officer advised Denhof that she was under arrest, at which point Denhof dropped to the ground, began screaming and resisted being handcuffed. Police eventually handcuffed her and took her to the Mower County Jail.

A review of Denhof’s criminal record shows prior convictions for membership card forgery, theft, financial transaction card fraud and assault. She is currently on probation for drug possession, check forgery and issuing dishonored checks, all felonies.

Denhof will appear in court again on Jan. 30.

Snowshoe or hike by candlelight at Myre-Big Island State Park on Feb. 15

The Department of Natural Resources will host more than 30 candlelight events at Minnesota state parks and trails this winter,... read more