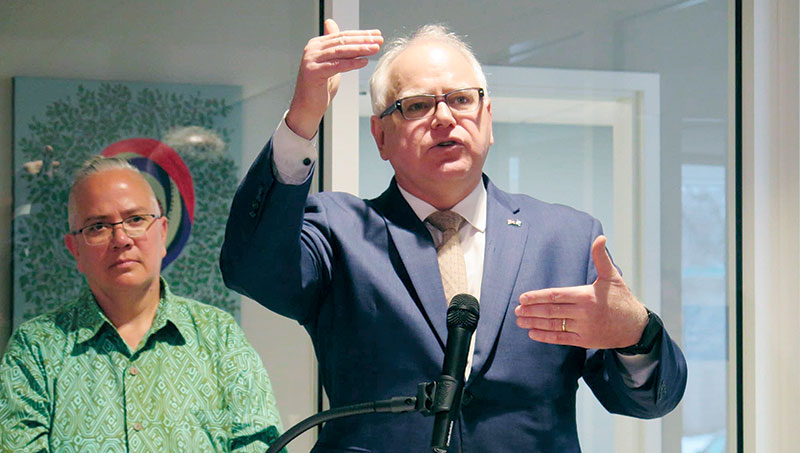 Minnesota Gov. Tim Walz on Thursday said he will recommend a roughly $2 billion package of public construction projects this year, including $276 million for housing projects.

Walz kicked off a series of four bonding bill announcements at Minnehaha Commons, a 44-unit facility in Minneapolis that houses formerly homeless veterans and seniors. He said investments in affordable housing should be a priority.

‘We can’t wait on these projects,’ the DFL governor said during a news conference. ‘The needs are real. Interest rates are low. There’s no reason not to act.’

Walz, joined by Lt. Gov. Peggy Flanagan and other state officials, said he wants to focus the initial attention on his plans for borrowing on the projects themselves rather than the package’s total price tag.

Flanagan said the bulk of the governor’s housing proposal would encourage developers to take on similar projects through a competitive program.

‘Every man, every woman, every Minnesotan, every child — without exception — deserves a safe, affordable and dignified place to call home,’ Flanagan said.

Minnesota Housing Commissioner Jennifer Ho said the housing infrastructure bonds would serve as a public incentive for the private sector.

‘We believe the role of government is to produce housing where the private market won’t do it on its own,’ Ho said.

Over the next several days, Walz will also unveil bonding packages related to water infrastructure, higher education and public safety. The governor insists that a $2 billion bonding bill would fit within the state’s borrowing capacity.

‘To not do this is not only wrong for future investments, it is fiscally irresponsible not to invest,’ he said.

House Majority Leader Ryan Winkler, DFL-Golden Valley, agrees with the governor’s assessment. Winkler said he, too, believes the time is right for a robust bonding bill.

‘Infrastructure needs across the board and across the state are very high. So, we think it’s time to move a lot of those issues off the table when the time is right,’ Winkler said.

But bipartisan support is needed in the Legislature to reach the three-fifths super-majority threshold required to pass borrowing bills. Republicans have traditionally opposed bills that exceed $1 billion.

‘My figure is going to be different than the governor’s figure, by the way. It’s not going to start with a two, I can assure you that,’ Daudt said.

Republicans in the Minnesota Senate are also looking at a smaller bonding bill. Senate Majority Leader Paul Gazelka, R-Nisswa, said he would be more comfortable with something in the range of $825 million to $998 million.

Gazleka said the state should not borrow money just to get a good deal.