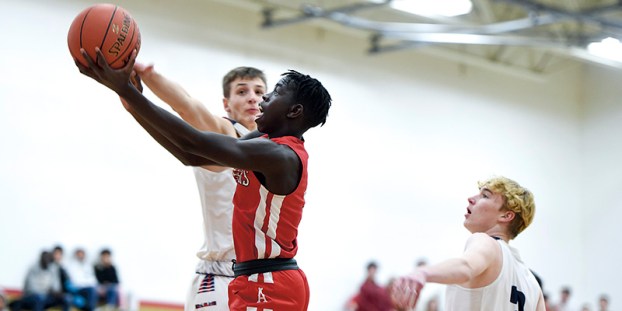 Austin’s Okey Okey coasts in for a lay-up against Albert Lea in the first half Tuesday night in Packer Gym. Eric Johnson/photodesk@austindailyherald.com

The Packers started the night with the shock and it ended on the wrong side of a historic outcome as they lost to the Albert Lea boys basketball team 72-71 in Packer Gym Tuesday night.

Agwa Nywesh sank a three-pointer as time expired but it was too little, too late as the Tigers (5-7 overall, 4-6 Big Nine) went five-for-six from the free throw line in the last 32 seconds to ice the game.

“Give them credit. I thought they defended extremely well around the basket,” Austin head coach Kris Fadness said. “We had a hard time getting it inside and we had a hard time scoring in there. It resulted in a lot of three-point shooting and at times we shot it well tonight, but it was in streaks.” 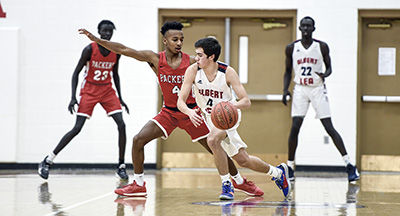 The Packers (11-3 overall, 8-3 Big Nine) came out shooting in the second half as Teyghan Hovland hit back-to-back threes and Pierre Lilly and Okey Okey, who had 18 points, added three-pointers of their own to put Austin up 45-39, but that lead didn’t last.

The Tigers continued to push and they used 9-0 spurt to grab a 65-59 lead late in the game. Chay Guen gave the Packers plenty of trouble inside as he scored 23 points for the Tigers.

“They handled our pressure for the most part and they played really well. They played better than we did,” Fadness said.

Austin jumped out to a 4-0 lead, but it lost momentum when Ogur Gari went down with an apparent knee injury. Gari never returned for Austin, which has now lost two games in two days.

“It obviously hurts (losing Gari), but you’ve got to play. Your guys have got to step up and play and it didn’t happen,” Fadness said. “Right now the challenge is just to mentally get right. Playing on the road in a big game last night didn’t help us tonight and I don’t think we were there mentally. We started well in the second half, but then we got sloppy with the ball and we couldn’t get stops when we needed them.” 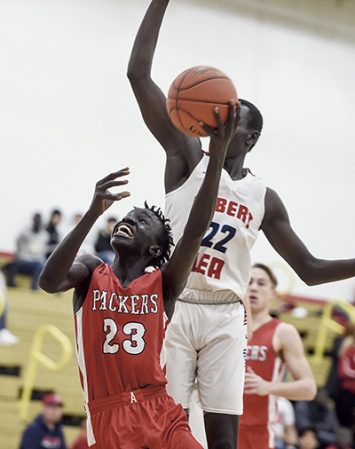 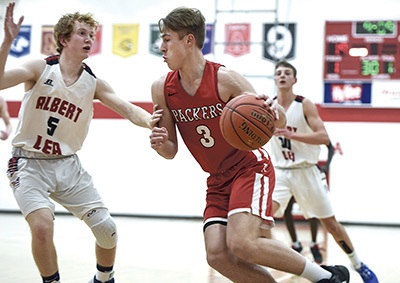 Austin’s Teyghan Hovland drives on the baseline during the first half against Albert Lea Tuesday night in Packer Gym. Eric Johnson/photodesk@austindailyherald.com