Teen charged with assaulting, threatening women; One victim was a juvenile

According to the court complaint, police were dispatched on a domestic disturbance call  at about 8:51 p.m. on Jan. 9 in the 700 block of 23rd Avenue Northwest. They met with a woman and a juvenile female who said Constans assaulted them. 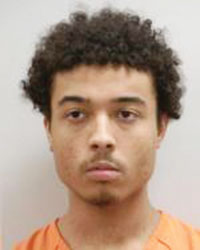 The woman said the incident occurred at her residence in the 900 block of 23rd Avenue Northwest. She told police she and Constans were arguing when it happened, saying that Constans was following her around and yelling at her when he pushed her and threatened to kill her. The juvenile female tried to intervene and Constans pushed her and punched her in the chest, knocking her to the floor. She then said Constans began throwing items at them, so they left the residence to avoid further harm.

Police searched her residence, but did not find Constans. The residence was in disarray; police saw a broken lamp and donuts on the floor.

Later that night, the woman called police and reported that someone was knocking on the door and that she was afraid to see who it was. Police arrived and located Constans, who was then arrested and transported to the Mower County Jail.

Constans will appear in court again on Jan. 23.