Sylvia Katherine Spartz was born April 19, 1926, near Dundas, Minnesota, in the rural farm house of her paternal grandparents. The second eldest daughter of Francis (Frank) Spartz and Etta (Andrews) Spartz. Her elder sister Delores, who was five, was present at her birth. Born two months prematurely and with no doctor in attendance, Sylvia’s survival was unlikely except for her grandmother’s instincts to swaddle the tiny baby in a cigar box and set her in front of the wood burning cook stove to keep her warm. 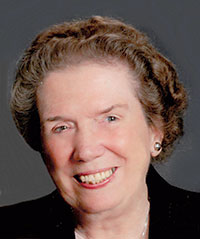 Survive Sylvia did until at age 93, still battling for the joy of living, she passed away at the home of her daughter, DeAnna Dahlgren, and son-in-law, David K. Sutton II in Fort Collins, Colorado, on Jan. 5, 2020. For the last three weeks of her life, Sylvia and her constant feline companions, BigBoy and LittleBit, were cared for by her family, Pathways Hospice and her devoted friend Darlene Myers.

Etta and Frank Spartz divorced when Sylvia was quite young. When her mother remarried, the man Sylvia credited with protecting her and raising her, John Paul Mork, entered her life. To her he was Johnny Pa and to subsequent grandchildren he was Grandpa Johnny, a tall, robust Army veteran with ready humor and a great laugh. Though there was no formal adoption, Sylvia took his name and until her marriage to David E. Thompson in 1947 she was Sylvia Katherine Mork.

Throughout her young life Sylvia’s happiest times were with her maternal grandparents, Anna and Ben Hall, on their modest 20-acre farm near Oakland, Minnesota. When she and David divorced, grandma Annie and Ben again welcomed Sylvia and her six-month old daughter DeAnna into their home. Though divorced from David, Sylvia remained close to his parents, Melvin and Alice Thompson, and DeAnna’s nine aunts and uncles.

In July 3, 1951, Sylvia married Michael (Buzz) Marvin Shultz Jr. Buzz had served in the United States Navy, and one of Sylvia’s most unique early tailoring projects was to restyle one of his navy blue wool uniforms into an exact replica albeit much smaller uniform for their son, Michael Marvin Shultz III. With two small children and Buzz’s night shift work as a welder in the mechanical division of Hormel Meat Packing, there wasn’t much available time to express her inherent creativity beyond the kitchen and sewing clothes for the family. Still, in their small cottage home on Winona Street, Sylvia distinctively designed colorful rooms.

While never having completed secondary school, Sylvia planned and executed her own later-in-life education. After passing her GED test, she enrolled in business courses at Austin Community College (Riverland) earning a Vocational Certificate with High Merit in 1974. This was after having created a highly successful in-home business introducing stretch fabric techniques and selling the fabrics themselves from her basement. Completion of those courses led to a job with Baudler, Baudler and Maus, Attorneys, and then a career in the Health and Human Services Department of Mower County from March 1978 to May 1991. Each step was part of a plan to ensure she would have adequate retirement income to live comfortably and continue to enjoy her many artisanal hobbies. This work also supported Sylvia after she and Buzz divorced in 1977.

Through her last day on earth Sylvia had incredibly beautiful, elegant hands. With those hands and her boundlessly creative mind she mastered the fiber/fabric arts of quilting, embroidery, cross stitch and knitting. Sylvia also took up oil painting and tole painting. She was a perfectionist who would rip out a foot-long section of a knitted baby blanket to pick up a missed stitch. Those blankets and the hundreds of scarves that followed were destined for children in Romanian orphanages, a mission of her church, Westminster Presbyterian.

Sylvia retired from Mower County the day following her 65th birthday. While she developed many long- lasting friendships with her county cohorts, it was just a job, and Sylvia was excited about launching the next phase of her life. She moved to Fort Collins, to be near her children and her grandchildren, Michael’s daughter Sarah and son Stephen.

Unfortunately, the high desert plains didn’t suit Sylvia’s health, and she moved back to Austin, bought a house and reconnected with an old friend, recently widowed Arthur Arnold Moen. A short, whirlwind courtship resulted in their wedding on May 29, 1999.

Before accepting his proposal of marriage, Sylvia extracted a promise from Art that they would have at least ten good years together. Despite advancing diabetes and years of dialysis, Art kept his promise of 10 years and an 11th for good measure. He passed away, September 10, 2010, at their home in Austin, leaving Sylvia in the good companionship of their four cats, all of whom were adopted from the Mower County Humane Society.

The older cats succumbed to age, but “the twins” BigBoy and LittleBit, moved from the 800 Sixth Street house to the Austin Primrose Retirement Community with Sylvia in March of 2018. At the end of that year Sylvia made the unexpected announcement that she wanted to return to Colorado, and in February 2019, rode through a raging blizzard to her new apartment at MacKenzie Place in Fort Collins, just one mile from David and DeAnna’s home.

While reluctant to leave her house on Sixth Street, Sylvia molded her life at both Primrose and MacPlace to suit her needs. Of both communities she said the resident aides, who pampered her with three meals a day room service, applesauce with her pills and the correct eye drops in each of her eyes, were all “the nicest, most pleasant young girls” she could ever hope to see. Her failing eyesight didn’t allow her to always differentiate between them, but she knew their voices. For that loving, compassionate care, we, Sylvia’s family, thank those young girls — no matter their age.

At MacKenzie Place she made a very special young friend, who so looked forward to his trips to see Miss Sylvia. Four-year old Jax Myers accompanied his mother Darlene on her visits to Sylvia’s and having him run into her room with a big hug was Sylvia’s thrice-weekly joy. They shared a love for her cats, of jelly beans (Jax’s limit was five per visit) and of mint-stuffed Oreos.

Before her passing Sylvia also got to meet her great-grandchildren, Steve and Lexi’s son, Wesley Michael, and Scarlett Amber, Sarah and Pat Huntly’s daughter.

Of her five siblings, her youngest sister, Faith (Tudy) Horn, and her brother, Ronald Mork, survive Sylvia. Faith lives in Wisconsin with her husband Gerald; Ronald lives with a son in Florida. Sylvia’s sister, Delores (Lester) Kirkwood, passed away in 2007, and her sister, Dorothy (Vernon) Heneman, passed away in 2014. All three of her husbands preceded her in passing. Sylvia grieved the deaths of her beloved Grandma and Ben during all the years between their passing and hers. Her childhood friend Eileen (Kulas) Gibis also passed away prior to Sylvia.

Sylvia could always depend on the kindness of friends, who later in her life were companions as well as caregivers. Judy Nelson, with whom Sylvia worked at Mower County, and her husband Mike were one such couple. Mike did odd jobs around Sylvia’s house, and Judy escorted her to numerous doctors’ appointments. Pam Schaeffer-Smith and Sylvia bonded over quilting. After Pam’s mother passed away in 2016, she adopted Sylvia as her second mother frequently visiting her including a 2019 Fourth of July visit in Fort Collins. Ann Mueller, a deacon at Westminster Presbyterian, became a close friend far beyond her official church duties and was instrumental in helping Michael settle his mother at Primrose. Jacky Dietz, another member of the Westminster Presbyterian congregation, worked tirelessly with DeAnna to organize the 800 Sixth Street house for sale. Cheri Schue, another county cohort remained in touch with Sylvia right up until five days before her death. There were so many like these good friends who are not named because while they cared for Sylvia they were not known to her children.

Wishing to be buried next to Art in her hometown, Sylvia is again returning to Austin. Funeral services will be at Westminster Presbyterian Church, at 11 a.m. on Saturday, Jan. 18, 2020. Visitation will be held one hour prior to the service at the church. Interment at Oakwood Cemetery will immediately follow. Sylvia’s family will host a luncheon for her many friends in the Primrose Retirement Community Room at 1 p.m. Worlein Funeral Home of Austin is assisting the family with arrangements. Condolences may be expressed to the family online at www.worlein.com.