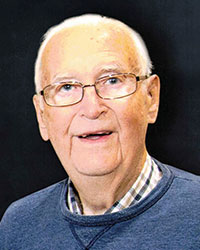 Roger was born on May 10, 1935, in Blooming Prairie, Minnesota, to Richard and Nell (Gorvin) Johnson. According to life-long friend George Myers, Roger earned the nickname “Moose” in third grade due to the fact he was already so much bigger than everyone else. Roger didn’t stop growing until he reached his full height of 6’5” and continued to be called Moose the rest of his life. In 1953, Roger graduated from Blooming Prairie High School, where he played football, baseball and basketball. He went on to play football and basketball at Austin Community College and Winona State. Roger was a member of the “1,000 Points Club” before three-point shots existed and was inducted into the BP Athletic Hall of Fame in 2010. In his younger days, Roger worked at Johnson’s Meat Market, established by his grandparents, and Jorde Building Supplies in Blooming Prairie. He later worked at Hormel Foods in Austin, Minnesota, for over 30 years. He served in the U.S. Army National Guard from 1957-1963. Roger enjoyed hunting, fishing, watching the Vikings, and everything about nature, from bird watching to witnessing the sun rise each morning. He was a member of the Blooming Prairie Gun Club and Ducks Unlimited. Above all else, Roger loved and enjoyed spending time with his family.

In October 1966, Roger married Doreen Kesteloot Sheedy, a widow with three children, and together they added another daughter to their family.

In addition to his parents, Roger was predeceased by a brother; a sister; and a daughter-in-law. He is survived by his spouse, Doreen; children, Pamela (Jack) Duffey of Richfield, Minnesota, Pat Sheedy of Warsaw, Minnesota, Kathryn Anderson of Blooming Prairie and Joan (Michael) Olson of Belle Plaine, Minnesota; 11 grandchildren; 16 great-grandchildren; and nieces and nephews.

Roger was dearly loved and deeply respected for his humble spirit and his gentle, kind heart. The family would like to extend their gratitude to the Hospice Team from Allina Health, especially Tom, Kristi, Heidi, Laura, Patty, Carmen and Irene, for their support and care.

Services will be held at 10:30 a.m. on Thursday, Jan. 9, 2020, at Our Savior’s Lutheran Church in Faribault with the Rev. Jeff Sandgren officiating. Visitation will be from 4-7 p.m. on Wednesday, Jan. 8, 2020, at Boldt Funeral Home in Faribault and will continue for one hour prior to the service on Thursday at the church. Interment will be at a later date in Maple Lawn Cemetery in Faribault. Those who wish to remember Roger in a special way may make gifts to the Blooming Prairie Education Foundation, Box 521, Blooming Prairie, MN 55917. Visit boldtfuneralhome.com for information and guest book.