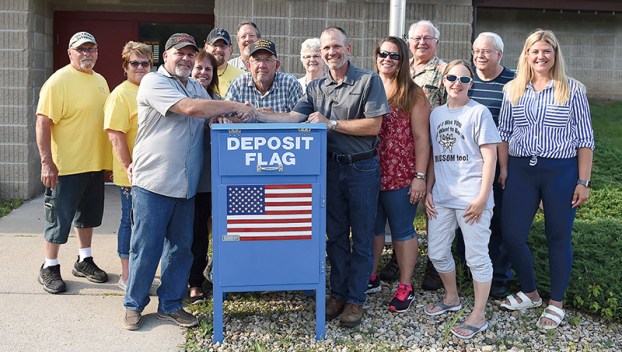 The pavers honor a veteran in the area, while the boxes, stationed in area communities, give people a place to take old or damaged flags so they can be properly taken out of service.

The four towns getting disposal boxes were LeRoy, Glenville, Albert Lea and Lyle.

The idea to build these boxes came when a club member was sent a photo of one down south and decided it was a cool idea.

The boxes allow people to drop off flags at American Legion or VFW sites, even if the buildings are closed, said Club Member John Devries.

“I guess they’ve been emptying them every week. They’ve been pretty full,” he said. “It’s been a pretty good hit on them.”

The River Rats Club is happy to be part of the community and wants to help out, Devries said.

Altogether, the club has funded around 75 pavers for veterans who cannot afford them, Devries said.

The club is more than willing to pay for pavers for veterans, he said. 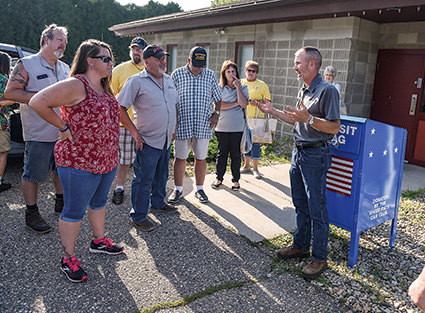 Douglas Miner, president of the Blooming Prairie Serviceman’s Club thanks members of the River Rats Car Club for the donation of the flag drop-off bin in front of the club last July evening. Herald file photo

“The car club would certainly take care of it in appreciation for all they’ve done for us,” Devries said.

A couple years after the club had been formed, the group was discussing hosting a car show and how money raised should be spent, held the third weekend in August, should be spent.

When some members recalled the poor reception Vietnam veterans received when they came home, the group decided to use the money for veterans of any era, Devries said.

Some of the cases that stand out to him were getting pavers for a father and son, both of whom were in the military, and purchasing pavers for five brothers after their sister reached out to the group.

He said veterans and their families are grateful for the club purchasing the pavers.

“A lot of them are really grateful that somebody is thinking about them,” Devries said.

Members of the club go to a number of car shows around the region.

One thing the group has been working on with their event is to make it fun for the whole family, Devries said. While the car lover is inspecting vehicles, their spouse can visit vendor booths set up in Lafayette Park, where the show is held, and kids can participate in activities like Hot Wheels races.

“We’re trying to get the family back into car shows,” Devries said.

With both food and craft vendors, the club tries to make sure everyone has its own niche and isn’t duking it out with other sellers for customers, he said.

What Devries loves in general about shows is that it is an opportunity to meet people and enjoy time spent with others.

More information about the River Rats Car Club can be found on its Facebook page.

The five Bjork brothers all have pavers next to each other, thanks to help from the River Rats Car Club.

MINNEAPOLIS — The number of people in Minnesota arrested for driving while impaired grew by nearly 5 percent last year,... read more